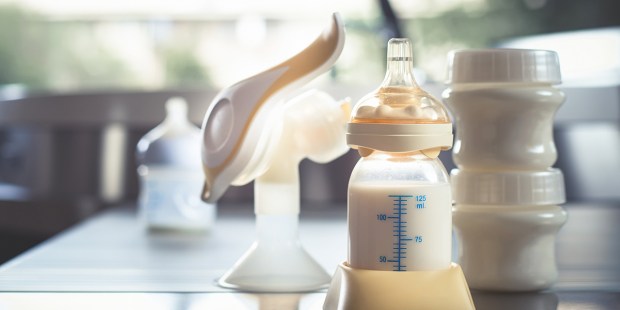 The sugars in breastmilk can fight bacteria directly, and may help researchers develop new antibiotics.

When we lived in Vegas, I went on this crunchy kick and had a baby in a blow-up tub in our living room. Don’t worry, I had a midwife — I’m not crazy!

The rest of this introductory story is not going to help my case, but I’m going to tell you anyway. Baby Liam had a blocked tear duct for the first few months of his life, and I was not terribly vigilant about remembering to massage it several times a day. So every once in a while, it would get really goopy and gross. Once when this happened, my midwife told me to squirt some breastmilk in his eye.

Read more:
What You Should Know If You’re Going to Buy (or Donate) Breastmilk

“Oh.” I said. “Um, okay.” Then I squirted breastmilk into my son’s eye and braced myself for years of therapy.

Lo and behold, it worked within hours. The goop cleared up and he stopped trying to scratch his own eye out, and I became a breastmilk-as-DIY-antibiotic convert.

So much so that a month later, when Charlotte developed an ear infection on a Friday night and I was staring down a long weekend of fevers, screaming, and fitful sleep, I pulled a Hail Mary and squirted breastmilk into her ear (bracing myself for more years of therapy). But, you guys … by the next day her fever was down and she slept soundly, and by the time I got her to the pediatrician on Monday morning her ear infection had almost entirely cleared up.

So I was not surprised by this article in Science News about the results of a new study on the antibacterial properties of breastmilk:

Scientists may have found a sweet new way to fight Group B Strep: Sugars in some women’s breast milk busted up colonies of the potentially harmful bacteria in a small lab study.

The results, published online June 1 in ACS Infectious Diseases and presented August 20 in Washington, D.C., at the American Chemical Society’s annual meeting, raise all sorts of possibilities. Perhaps these sugars keep Group B Strep in check and so babies don’t readily acquire infections while nursing. If so, and if researchers can identify the exact sugars responsible, those molecules might be converted into desperately needed new antibiotic drugs that could sidestep some of the problems, such as bacterial resistance, with existing antibiotics.

Nor was I surprised to read that the composition of breastmilk from different women varied dramatically, with one woman’s sugars proving particularly potent at fighting Group B strep, and others having no effect whatsoever. In fact, I have my own lay theory about that.

We’ve all seen that picture of the two bags of breastmilk from the mom that noticed how hers changed when her daughter was sick, right? The milk when the baby was healthy was white, and when the baby was sick it turned yellow. Doctors have explained that mammary gland receptors detect viral and bacterial changes in baby’s saliva and respond by changing “the milk’s immunological composition, tailoring it to the baby’s particular pathogens by producing customized antibodies.”

So it follows that the breastmilk sugars that were particularly adept at fighting off Group B strep might have been responding to a bacterial infection in the nursing infant. This is the reason we can’t wield breastmilk the way the dad in My Big Fat Greek Wedding wielded Windex and put it on everything; it will only respond to viral and bacterial threats detected through infant saliva.

But in my defense, I was kind of right. SCIENCE SAYS SO!