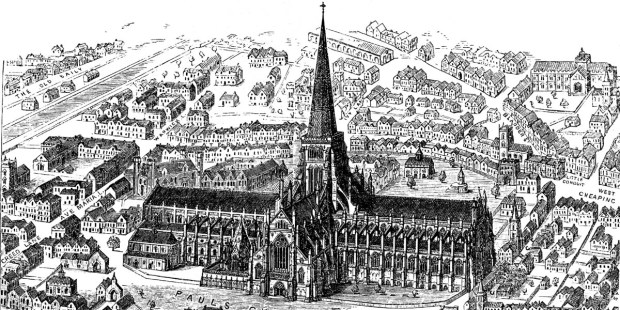 Even the layout of the church speaks of Christ’s crucifixion.

When Christians started building churches of their own, they naturally took great care with the planning. At first churches were fashioned after the popular Roman basilica style, as it was apt for a large number of people.

These ancient basilicas were long rectangular buildings with a semicircular apse at the top. The apse was traditionally the place where a Roman judge or emperor would sit. Christians converted this idea into the area where the sacrifice of the Mass was celebrated. In this way Christ was seen as the true judge and ruler, supplanting the role of the Roman leaders.

It didn’t take long for architects to expand on the symbolism of the basilica by adding two transepts directly below the apse. This additional space provided extra room for worshipers and areas to dedicate shrines to local saints. The result was a church that resembled a cross when looked at from above. It reminded Christians that they were to conform themselves to the cross of Christ and daily participate in his sufferings.

To further cement the symbolism, each part of the cruciform church possessed multiple levels of meaning.

Traditionally churches were built facing East and the apse was located in the direction of the rising sun. It symbolized the direction from whence Christ, the light of the world, would come again. Additionally, the apse was the location on the cruciform church of Jesus’ head. Since the head is what directs the rest of the body, all worshipers in the church looked to the head, where the Eucharist was celebrated.

Similarly, the apse also represented the location of the head/leader of the local church, the bishop. Later on the priest assumed that role as the number of churches expanded.

Directly below the apse are two areas that extend the church in either direction. These are known as transepts and represent the right and left arms of Jesus on the cross.

The main rectangular area of the church where the worshipers gather is called the nave and represents the body of Christ. Christian believers have always been referred to as the body of Christ, as St. Paul points out in his letter to the Corinthians, “For just as the body is one and has many members, and all the members of the body, though many, are one body, so it is with Christ. For by one Spirit we were all baptized into one body—Jews or Greeks, slaves or free—and all were made to drink of one Spirit” (1 Corinthians 12:12-13). The word nave comes from the Latin word for ship, because of the long central aisle’s resemblance to the hull of a ship, and symbolizes the Church as the barque, or ship, of Peter the fisherman.

The last part of the cruciform church consists of a narthex, sometimes today called a gathering space, at the bottom of the church plan. Historically this was often a covered area outside of the church building and was the gathering place for catechumens not yet admitted into the Church. They were not yet part of the Body of Christ through Baptism and had to wait until Easter to walk through the doors and become united with rest of the congregation.

Read more:
Look up! The spiritual reason why churches have domes