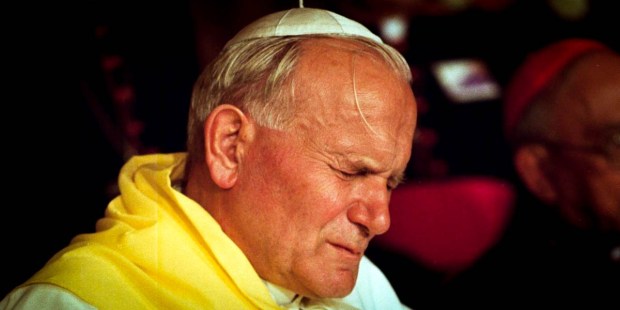 Papal biographer George Weigel says saint’s example of living “out” from prayer is example for the rest of us.

These days a lot of movies that come out on DVD include a bonus feature about how the movie was made. “The Making of The Lord of the Rings,” for example.

George Weigel’s new book, Lessons in Hope: My Unexpected Life with St. John Paul II, is sort of like that: how his masterful two-volume biography of Pope John Paul II came to be and how it was put together.

We follow Weigel as he shuttles between his base in Washington, D.C., and Rome, having frequent lunches or dinners with John Paul and his longtime secretary (now Cardinal) Stanislaw Dziwisz. He takes fact-finding trips to the Polish cities associated with Karol Wojtyla’s life and ministry. He lets us eavesdrop on his conversations with members of Wojtyla’s Srodowisko, a group of young people he counseled as a young priest and bishop, and prominent cardinals in the Vatican. He lets us tag along on papal journeys abroad, for World Youth Day or historic visits to places no pope had been to before.

One such visit was John Paul’s five days in Cuba, and Weigel shares some of his own adventures in trying to “cover” the pontiff. The trip almost didn’t happen for Weigel, as he had a long “anti-Castro paper trail” as a conservative scholar and writer. When he finally does get his visa, he secures a seat on a chartered flight from New York, which included a large group of Hispanic pilgrims and a number of American bishops. Landing at Jose Marti Airport in Havana, an assistant for Cardinal John O’Connor gets temporarily delayed as he attempts to get a large package through customs. Its contents were not recognizable to the customs agents, viewing it on an x-ray machine, so the assistant had to open the package.

“For which soccer team is this?” the agent asked, thinking it was a trophy.

In fact, it was a large gold chalice O’Connor planned to donate to the  local Church.

While on the island, Weigel meets a tavern owner who movingly confesses his admiration for the pope, telling Weigel that he has tried hard for 40 years to keep his family Catholic. John Paul’s visit is a strong affirmation for this Cuban son of the Church.

The visit may also have encouraged a member of the Cuban hierarchy to speak a little too critically—at a public event, with Raul Castro in the front row—of Fidel’s regime and the severe lack of religious freedom on the island. That night, the Cuban bishop’s home mysteriously lost its electricity, and the next day, Cardinal O’Connor and his entourage were grounded for hours in the airport of Santiago de Cuba. According to the official explanation, there was a no-fly order while the papal plane was in the air. It was obvious to the cardinal’s party, which included Weigel himself, that this was a boldfaced lie, as other airplanes were taking off and landing. As the hours wore on, Weigel thinks, he could see steam coming from O’Connor’s ears.

The book is filled with such anecdotes, which complement Weigel’s descriptions of John Paul and remind us of the challenges the pope had in bringing the Gospel to such peripheries.

John Paul’s agenda for the New Evangelization and his fight for human rights faced challenges from within, as well, including remnants in Church leadership of the 1960s-era Ostpolitik, the policy that took a softer approach towards atheistic communist regimes in the hope that the Church in the Soviet Union and its satellite states would be allowed some modicum of freedom. Equally if not more challenging is Rome’s slow reaction to emerging news in 2002 of a clergy sexual abuse scandal in the United States.

Asked how, in that regard, John Paul could have shown such strong support for the founder of the Legionaries of Christ — Father Marcial Maciel, for example — Weigel commented, “Father Maciel was, it seems, a very clever sociopath who fooled a lot of people.”

Did the pope have other shortcomings? Weigel said in an interview:

In the last part of The End and the Beginning, I discussed how one might assess a pope’s “heroic virtues,” which I had to do as an official witness for his beatification/canonization. How, for example, does one assess a pope’s heroic exercise of the virtue of prudence? It can’t mean that he gets every decision right, because no one ever does. So it must mean that he made decisions without fear or favor, rancor or duplicity. But no pope gets everything right. John Paul II got a whole lot more right than he got wrong in making the decisions that only he could make.

“Everything he did was a by-product of his prayer,” he said. “That was true of his work as a priest and bishop in Krakow, and it was true of his ministry as Bishop of Rome. He lived ‘out’ from his prayer. That’s something all of us can do.”