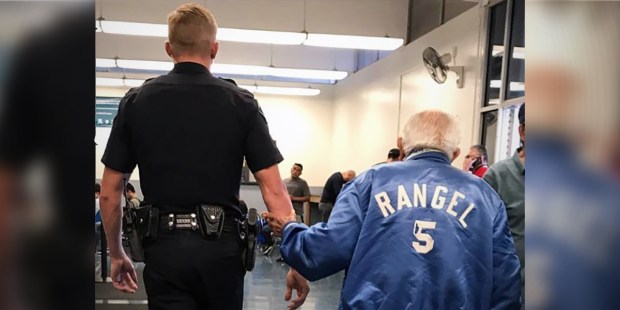 And teaches us a thing or two about compassion.

So often, we get to hear of all that is wrong in the world, so when the Montebello police shared a recent post of their officers responding to a “disturbance” in a bank we were bracing ourselves for yet another disturbing event. However, we were pleasantly surprised, and full of gratitude, to hear of the compassion and understanding shown by the officers to a 92-year-old man whose only crime was trying to maintain some level of independence.

In late September, the Bank of America in Montebello, California, called the police to help deal with a patron who was causing a “disturbance.” The officers had no idea what to expect as they entered the bank — considering it was a bank, the options could have been pretty scary. Yet, the cause of complaint was an elderly gentleman who had become distressed when the bank refused to allow him to withdraw money from his account due to an expired California identification card.

The post explained: “Per the bank’s policy, because his identification card was expired, they were unable to fulfill his request. The gentleman was upset and the police were called.” This may seem an extreme measure; the nonagenarian could have technically been arrested for disorderly conduct, but thankfully it worked out for the best.

Officer Robert Josett took the initiative to take the man to the DMV to renew his card, and then took him back to the bank to help him withdraw his money. While Josett may have gone beyond the call of his police duty, he carried out his civic duty with empathy and kindness. So it’s understandable that the post has been shared more than 40,000 times and garnered over 20,000 comments praising these officers for their actions.

“This Officer is a Saint!” one Facebook user posted. “All this Little Grampa wants is to keep his Independence. And the officer helped him in a dignified manner. Good Job Officer!”

We couldn’t agree more. And if you take a close look at the sweet photo of the pair, you’ll notice on the jacket of the elderly man, there’s a little angel in him, too!