Cora Evans: A Californian housewife and mystic on the way to sainthood 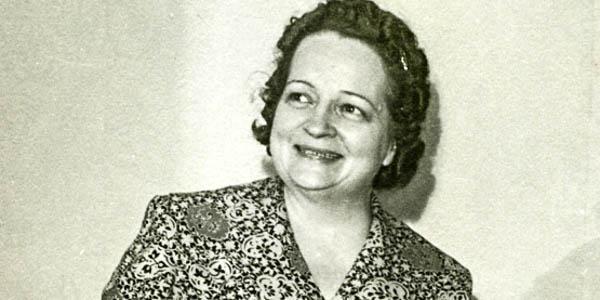 She was known to bi-locate and her children witnessed many of her spiritual gifts.

Born in 1904 in Utah, Cora Evans began life in a Mormon household. However, from the outset it was clear God had a special plan for her.

At the age of 3, Evans experienced a mystical vision of the Blessed Virgin Mary, though at the time she didn’t fully understand it. For the remainder of her childhood she lived according to the Mormon religion and eventually married her husband at the Utah Temple.

Shortly after her wedding Evans started to have doubts about the Mormon faith and began a long road of investigation. She searched and searched, but couldn’t find the religion her heart was longing for.

Then in 1934, while lying sick in bed, she heard a radio program called the “Catholic Hour” and afterward contacted a local Catholic priest. Evans met with the priest on multiple occasions and soon became convinced that God was calling her to be Catholic. A year later Evans, her husband, and two daughters, converted to the Catholic faith.

In 1938 her mystical experiences started again and she dedicated the rest of her life to God. She wrote, “It was necessary for me to live my chosen vocation with him as my companion. By loaning Jesus my humanity for him to govern as well as dwell within would make my life a living prayer, for he was life, living life within me, and my body now dead to me was his living cross, his cross to take to Calvary — Calvary, the door to eternal life.”

After converting to the Catholic faith, Evans and her family were severely persecuted by the local Mormon community, making it impossible for her husband to secure a job. They decided to move to California to find gainful employment.

Once there Evans continued to have heavenly visions of saints and searched for a spiritual director to help bring light to her situation. A Jesuit priest, Father Frank Parrish, agreed to the assignment and guided her through the mystical experiences.

According to the website for her canonization, Evans discovered God’s mission for her; “the Mystical Humanity of Christ, a way of prayer that encourages people to live with a heightened awareness of the indwelling presence of Jesus in their daily lives. It is Eucharistic spirituality, and Jesus promised to foster the devotion.”

Evans wrote about this spirituality and her mystical experiences in a diary. It was a difficult task for her as she had little education and was still rather new to the Catholic faith.

Her intense devotion to God brought with it many spiritual gifts. Our Sunday Visitor reports that Evans “had the stigmata (wounds of Christ), bilocation and the fragrance of roses associated with her presence.” Evans tried to hide these gifts from her family, but her daughter still witnessed the stigmata and was greatly impacted by it.

During her life she was a hidden mystic, unknown to the world besides her family, friends, a few priests and religious. She was a humble housewife who led a beautiful interior life dedicated to God.

Evans died in 1957 and before her death asked God to grant her the same ability as St. Therese of Lisieux — to spend her heaven doing good on earth. Since her death, Evans’ writings have been widely read and are a source of spiritual refreshment for many people.

Her cause for canonization was officially opened in 2012.