The 6-year papacy that saved Christendom: The story of St. Pius V 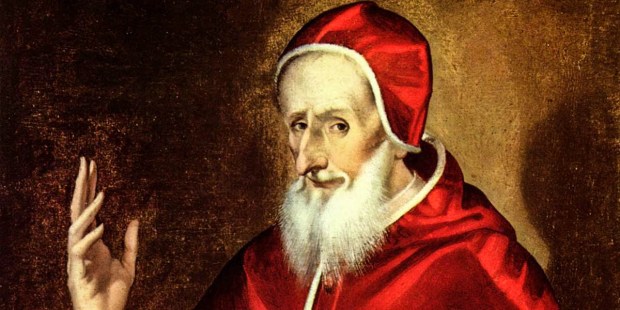 Did you know the feast of Our Lady of the Rosary is actually rooted in a battle?

October is the month of the Holy Rosary, so it is a good month to acknowledge the person known as the Pope of the Rosary, Pope St. Pius V.

In 1517, Martin Luther, a Catholic priest, posted his 95 Theses on the door of a church in Wittenberg, Germany. We are marking the 500th anniversary of the great theological revolt that ensued, known as the Protestant Reformation.

Part of the Church’s response to the Reformation was Pope Paul III’s convening the Council of Trent in the year 1545. The Council had much to face, as virtually all Church doctrines had been challenged by the Reformation, including the Real Presence and the validity of the sacraments.

The Council did not adjourn until 1563, some 18 years after its inception. A period of 46 years had elapsed since Luther’s 95 Theses were first posted. Three years after the Council adjourned, Michael Cardinal Ghislieri was elected to the papacy. He took the name Pius V.

Pope Pius V was a devout priest who found his strength in Christ crucified. He also held a deep devotion to the Blessed Virgin Mary. His first acts as pontiff were to give approval to the changes instituted by the Council of Trent and immediately implement the reforms set forth.

Pope Pius V codified the Tridentine Mass, and authorized a revised breviary and a new Roman Catechism and Missal. He promoted the Council’s teachings on the Real Presence of Christ in the Eucharist, and doctrinal statements on the sacraments of Holy Orders and Matrimony. He also affirmed Church teachings on Purgatory and indulgences. He would quickly have much more to do. The Turks of the Ottoman Empire were determined to conquer Europe and Rome.

Deeply devoted to Our Lady, Pope Pius V issued a document in 1569 called Consueverunt Romani Pontifices (On the Rosary), stting in place the format for the Rosary that is used most commonly prayed today. This is the same Rosary that Our Lady presented to St. Dominic in 1214.

But there was also the Ottoman Empire’s challenge to the papacy of Pius V and the Catholic Church. Pope Pius called together the Christian nations of Europe and formed them into what became known as the Holy League. Both Protestants and Catholics from different nations came together under the guidance of Pope Pius V to fight the Ottomans. Pope Pius asked all Catholics to pray the Rosary, asking for Our Lady’s intercession when the battle ensued.

And so it was that on October 7, 1571, the Battle of Lepanto took place, as the pope and thousands of his followers prayed the Rosary. Under the military leadership of Don Juan of Austria, the Christian fleet won a resounding victory over the more powerful Ottoman Turks. This battle literally saved Christendom. Pope Pius V declared that from that day on, the day would be called the feast of Our Lady of Victory. Today it is called the Feast of Our Lady of the Rosary.

The papacy of Pope Pius V lasted a mere six years. During his reign, he literally saved Christianity throughout Europe. He gave all credit to our Blessed Mother, and today she bears the title of Our Lady of the Rosary.

Pope Pius V was canonized a saint on May 22, 1712, by Pope Clement XI.  How honored he must be to be called the Pope of the Holy Rosary.

To learn more about the rosary, and the prayers included in it, see:

Read more:
4 Reasons to say the Rosary every day: The Fatima connection

Read more:
There’s a hidden prayer in the final petition of the Hail Mary

Read more:
The beautiful devotion of the three Hail Marys