3 Lessons about minimalism from St. Francis of Assisi 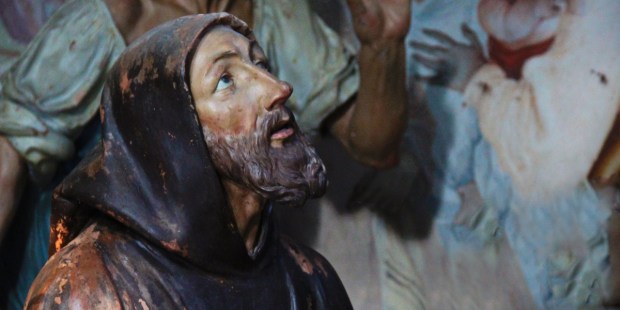 It’s not about getting rid of stuff, but about letting go.

Think you’re a serious minamalist because you got rid of your television and cleaned some boxes out of the basement? Downsized to a tiny house and now own just three shirts and one pair of shoes? We’ll, you still have way more than St. Francis of Assisi did. This is a guy who famously took off the very clothes he was wearing in front of a bewildered crowd because he refused to be beholden to his father for material possessions. He then became a wandering beggar because even a tiny house would have been too luxurious.

It wasn’t about minimalism for Francis, though, and his goal wasn’t simply to live with less stuff. A person could easily get rid of everything, de-clutter, become an icon of minimalism — and still have an empty heart. It isn’t as if emptying out the closet is a magic pill for all that ails you and if you simply toss it all you’ll be as happy as Francis. There was actually a method to his madness, and his minimalism was just a by-product of a larger vision he had of human fulfillment.

Here are a few habits of St. Francis that we all can keep in mind when we feel the need to simplify or downsize.

Stuff isn’t bad simply because it’s stuff; stuff is bad when we have too much of it and it overwhelms us. But even if I’m drowning in an overstuffed wardrobe of clothes that I don’t need, it doesn’t mean the solution is to throw it all away. Someone else could greatly benefit if I were to share it. Francis didn’t live a minimalist lifestyle for his own selfish purposes; he lived that way so that he could be more generous to others.

He was unencumbered as he traveled to spend time with and encourage charity for the poor. He got rid of all material restrictions on himself so that he could give his life away in love to others. So, when the cleaning bug strikes, we too can consider how to be generous not only with the things we want gone but maybe to give just a little more than we’re comfortable with, because generosity builds up treasure in the heart and wins a far more important possession – the love and gratitude of others.

Francis famously preached a sermon to a group of songbirds because he wanted to emphasize how, even if we fail to realize it, nature is heaven-shaped. The beauty of nature reveals a deeper, even more beautiful world beyond this one. Man-made things aren’t always able to convey the same message; some objects might be beautiful and lovely but other products are disposable and utilitarian.

Francis may have given away all his possessions, but he never gave away his appreciation for natural beauty. To be a minimalist doesn’t mean we have to only inhabit plain, ugly surroundings. In his “Canticle of the Creatures” Francis enthuses: “Brother Sun, who brings the day … is beautiful and radiant in all his splendor!” The more we’re able to share this attitude and see the beauty all around us, whether that be simply noticing the sunrise, taking a walk in the park, or playing catch with your dog in the backyard, the less stuff we’ll need in our lives.

The image that most of us probably have of Francis is a technicolor scene of a gentle man feeding a bunch of animals with huge, soft cartoon eyes. In fact, Francis lived a life of extreme poverty and ridicule. Most people thought he was a madman and even when he worked hard his whole life to overcome the doubters and organize a religious order, in the end he was even marginalized by his own followers, who were attempting to change his ideals for the community. But through it all he never lost his joy or peace of mind.

It takes courage to let go, to loosen your grip on the material possessions that provide comfort. It takes courage not to worry about people making fun of you for being different, or to stand up to the social snobbery of having a house that isn’t all that large, or only having one car instead of two. Francis shrugged off his fears, left everything behind and never worried what anybody said about him. If there’s one thing that minimalism can teach us, it’s that life is what we make of it and if we’re brave enough to cut ourselves free from any thing that holds us back, the reward is well worth the effort.

Read more:
WATCH: St. Francis of Assisi would have loved coming across this…