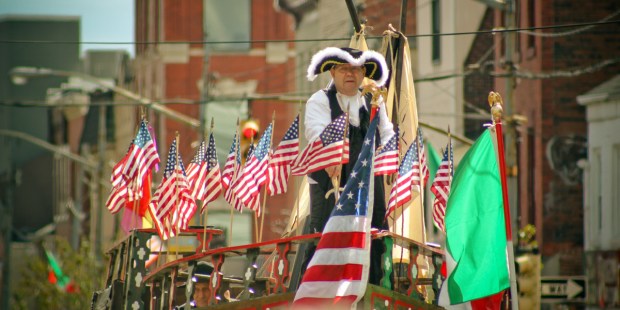 Some worry about immigrants coming to America and failing to assimilate. But after witnessing so many ethnic parties, I don’t.

Having lived all over the country has given me the happy opportunity to see ethnic celebrations up close.

For many years, Connecticut was the place my wife and I lived and moved and had our babies. There in in New Haven, where people are noted for their sensitivity about matters of political correctness, each year Columbus Day was a very big deal.

New Haven parties hard for Columbus, with Italian flags flying and reverences left at the feet of a statue of the explorer. This year’s West Haven Parade will be the biggest of its kind in New England.

Now we live in Kansas, which, as Superman put it in Man of Steel, is “About as American as it gets.” And here, at Benedictine College polka music was pumping late into the night last week, and then driving home after Sunday Mass, we got stopped by a random block party with a German flag flying beside an “Oktoberfest” banner. It seems that every weekend you can find lederhosen and Beer Maid dresses parading somewhere here.

Growing up in Tucson, Arizona, with a mother from Mexico, I got to witness Mexican festivals. These were never on Cinco de Mayo, which was not a day my mom or her family recognized. I also never saw a Día de la Raza (Columbus Day south of the border) in the United States either, though, as Jennifer Braceras put it in the Wall Street Journal, “Without Columbus, There Would Be No Latinos.”

The biggest Mexican festival we went to was on July 4. Bisbee, Arizona, would become a fiesta town with mining competitions, soapbox derby, loud Mexican and/or country music (you would be surprised at the crossover fans) and not Mexican, German or Italian but American flags.

Everyone worries about immigrants coming to the United States and failing to assimilate. But after witnessing so many ethnic parties, I don’t.

I can tell you firsthand that there are no more WASPish Americans than Italians in Connecticut, no more “true red white and blue” Americans than Germans in Kansas, and no one who thrills to the flag the way a new citizen from Mexico does.

Books like American Nations show that not only is assimilation possible — it is inescapable. Not only do immigrants assimilate, they tend to take on the political characteristics of the earliest citizens of whatever region they move into.

Celebrating our countries of origin isn’t an expression of regret for the past. It is our way of celebrating the wise Italians, Germans, Spaniards or Latinos that had the sense to leave their countries of origin and come here. These cultural memories don’t detract from commitment to America, they enhance it.

And Columbus, for all his flaws, is the archetypal first father of all of them.

Speaking to Catholics in Columbus’s native Genoa, Pope Francis compared all of our vocations to Columbus’s. “To be a disciple it takes the same explorer’s heart: horizon and courage,” he said. “It is the virtue of the explorer: they know how to read the horizon, to go, and they have the courage to go.”

That is the best way to celebrate Columbus Day on October 9, Día de la Raza on October 12 — or Oktoberfest all week if you prefer.

Hail whatever land your family sailed from, be grateful for this port of call, and set out for the next distant shore you are meant for: heaven.