Our Polish holiday at “Rosary to the Borders” (PHOTOS)

Along a beach on the Baltic seaside, we joined hundreds in Poland’s mass Rosary prayer event

JASTARNIA, Poland, October 7 — The weather forecast was favorable; after the depressing, rainy September, we were in for a spell of warmth and sunshine. We could either go to the mountains or to the seaside. As it turned out, the mountain trails were already icy and covered with snow and we did not fancy winter sports yet. So, like retirees in search of an October iodine cure at a coastal spa, we headed for the seaside town of Jastarnia where we arrived after nearly eight hours on the road. The weather forecast proved spot-on and we were greeted by wonderful sunshine in the half-deserted port town. There were few open cafes and bars; no souvenirs or stalls with second-hand clothes and books. All we had come to associate with summertime on the seaside was completely absent. 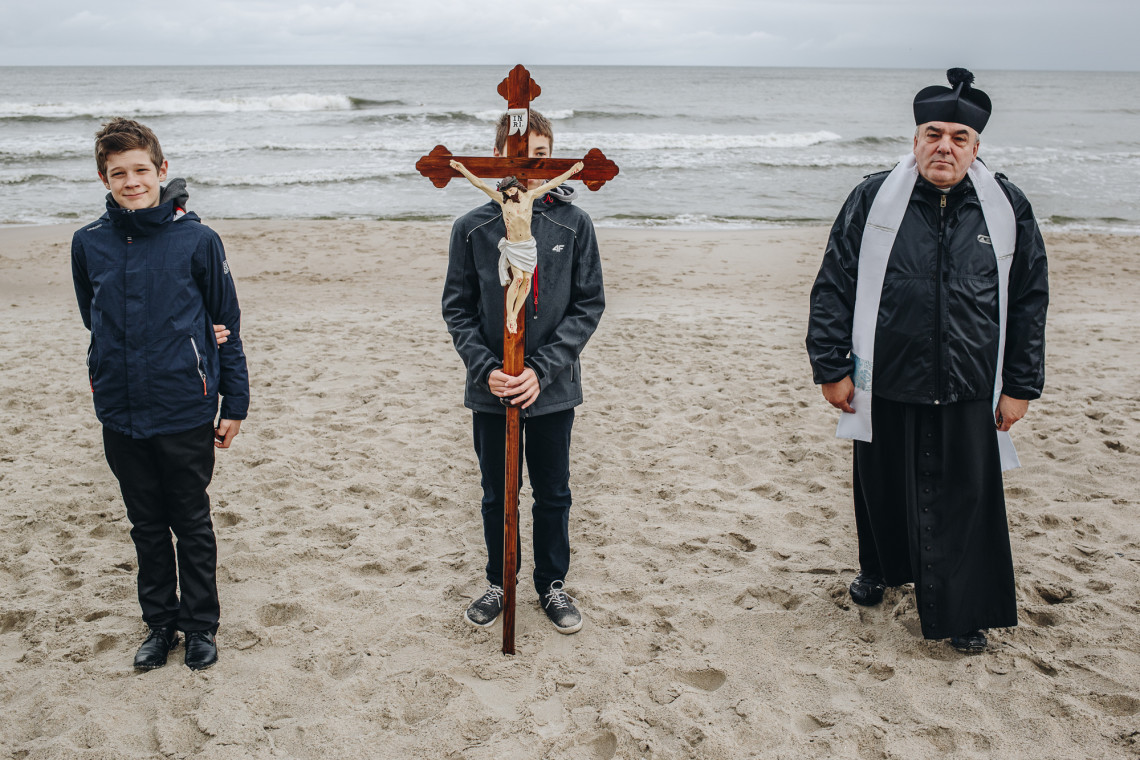 Jastarnia, Rosary at the Borders and fishermen

At this time of year, we would have thought that the local residents might say in unison: “the last one out switches off the light” and leave for other parts of Poland. We soon realised, however, that no one was going to turn off the lights, and especially not their spirit. The residents of this small seaside town enthusiastically embraced the “Rosary to the Borders” event.

Once we arrived there, we learned that Jastarnia is the only port along the Polish coastline where the boats do not set out to sea on Sundays. The fishermen still greet one another saying, “Blessed be Lord Jesus Christ.” A statue of Our Lady, the Star of the Sea, stands watch at the local parish church. There is no way the residents of this town were going to miss the Rosary prayer on the Baltic.

Because of stormy weather at sea, the fishing boats could not take the participants of the event to pray the Rosary along the sea border. However, when we arrived at the beach, we were able to see these boats on the horizon; the fishermen at sea prayed the Rosary along with all those gathered on the shore. The moment we began to recite the prayer, however, there were strong gusts of wind and it started to rain; I am sure we were not the only ones thinking that the entire event would finish soon. A minute later, though, the wind subsided, the sun shone and a rainbow appeared in the sky. Was this all a coincidence? Hardly.

Rosary prayer for the Church and the unity of the world

Katarzyna and Maciej from Milanówek near Warsaw came to the seaside with their six children, aged from one to eight. “We tried to pray for our home country, even though it was tough because of the kids. However, they are used to events like this as we would often participate in prayer vigils in the Jasna Góra Shrine of Our Lady.”

We could quote at least a few hundred testimonies like that – one for each of the people who prayed the Rosary on the beach in Jastarnia.

We often hear that the Rosary is a kind of prayer that is supposed to calm you down and be conducive to deeper reflection. Our prayers today no doubt calmed down the upcoming storm. What effect will they have on our country or on the entire world? That is hard to predict, yet we trust that together with Mary we will be able to sing: “the Almighty has done great things for me.”