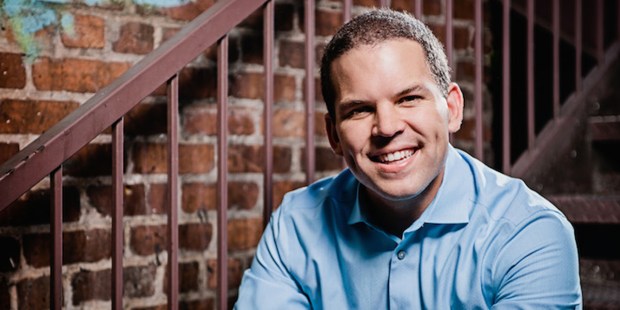 “The only time they give consideration to the Church is when it pops up in the news, and those instances are almost always negative.”

Many know Brandon Vogt because of his connection to Bishop Robert Barron and Word on Fire Catholic Ministries, where Vogt serves as content director. But his back story as a convert to the Catholic faith is the foundation of his ministry—to reach out to atheists, agnostics, “nones,” and fallen-away Catholics to bring them into the Church.

Ave Maria Press recently released Vogt’s newest book, Why I Am Catholic (and You Should Be Too), which is geared to those not in communion with the Church, as well as to practicing Catholics looking for a way to defend their faith.

Here he offers some insight into the book.

Is there one issue more than any other that is driving people–especially young people–away from the Catholic Church?

Vogt: We actually have lots of data on this question. From the Pew Research Center, to CARA, to several dioceses, several groups have conducted exit surveys, asking former Catholics why they left. And you know what is the number one reason people give? They “just stopped believing.”

There wasn’t one issue or experience that jettisoned them from the Church. They just stopped going to Mass every Sunday, then stopped being involved, then eventually, they realized, “Well, I guess I’m not really Catholic anymore.”

However, a second (and perhaps larger) subset of those who “just stopped believing” simply don’t agree with, or don’t ascribe value to, the Church’s teachings. Maybe they reject the Church’s sexual moral teachings (e.g., abortion, contraception, homosexuality), or they think the Church has distorted the basic Christian message, or perhaps they just no longer believe in God.

In my experiences with thousands of young people who have left the Church, there are traces of both of these reactions. However, the most common attitude I see is simply ambivalence. They just don’t care about religion, much less the Catholic Church. It’s not on their radar, they don’t think it can improve their lives, and they have zero interest in what it offers. The only time they give consideration to the Church is when it pops up in the news, and those instances are almost always negative.

Why did you focus on the goodness, truth, and beauty of the Church in Why I Am Catholic?

Because those are the three best reasons to be Catholic. And because most people believe the Catholic Church is just the opposite—bad, false, and ugly.

When I began exploring Catholicism in college and gave it a fair shot, I discovered, to my great surprise, that the Church’s claims were true—they checked out. And not only that, they were also good and beautiful, which is unsurprising since these three values almost always go together. They are mutually confirmatory. When something is true, it’s usually beautiful and good. Think of how scientists describe the mathematical structure of our universe as “elegant,” or the way philosophers describe beauty as “the splendor of truth.”

Also, I wanted to provide multiple avenues into the Church. For some people, truth is the preferred path. They gravitate toward intellectual arguments and are more drawn to a purely rational case for Catholicism. But for others, particularly of a more aesthetic bend, beauty is a far more alluring path. The Church’s extraordinary commitment to art, or the beauty of its diversity, are more attractive entryways.

Together, though, these three paths allow anyone to find their way into Catholicism.

Why should we try to engage fallen-away Catholics and nones, agnostics, and atheists in a discussion about the faith? Where should we start?

Some people might answer the first question by saying, “Because if we don’t, they may end up in Hell!” That’s true, and I agree that’s a serious worry that gives urgency to the task of sharing the faith. However, I’m very concerned by what people are missing out on now, on this side of heaven.

I’m utterly convinced that a flattened-out secularism does damage to people’s lives. I see it among so many young people. When you get rid of God and religion—when you embrace naturalism—you lose your basis for objective meaning, purpose, morality, and even reason (as I show in the book.) So many young people today are just floating along through life, without direction, without hope, and without purpose. And they’re greatly dissatisfied. Read any survey of millennials and you’ll see shocking levels of discontentment.

Why is this? Because secularism fails to satisfy the human heart. Only God can answer those longings. We’re made for him; we’re wired for him; and the Church offers the best connection to him. God wants to give everyone so many gifts through his Church, from the grace of its sacraments, to the inspiration of its saints, to the wisdom of its Scriptures, and so much more. And it’s through the Church that we receive those treasures.

I want disenchanted “nones,” atheists, agnostics, and former-Catholics to receive all of those gifts—not only in heaven, but here and now!

Where should we start? I like to begin on the lowest rung. If talking with an atheist, start by discussing whether God exists. Ask them what they think about God, and see if, perhaps, they reject a distorted version of God that you would happily eschew, too. If they’re a former Catholic, ask why they drifted away from the Church and what would possibly draw them back.

Ask questions. Listen. Don’t preach at them, but try to understand their experiences and beliefs before offering your own thoughts. And of course pray for them! The Holy Spirit has worked in human hearts for two thousand years, converting the most unlikely people back to God. He’s still working today.

If you had just one minute to convince someone to become Catholic, what would you say?

There are 10,000 reasons to become Catholic, which ultimately boil down to one: because it’s true.

How do we know? Because of three facts.

First, because God exists. There are several ways to know this, but the strongest is the universe itself. The universe doesn’t have to exist, and it doesn’t explain its own existence. We need an outside explanation, and upon reflection, God is the only plausible option.

Second, because Jesus is God. Jesus of Nazareth spoke and acted as God, and then vindicated those claims by rising from the dead. This is a historical fact.

Third, because Jesus started the Catholic Church. This is another historical fact. Jesus did not leave a book or a collection of letters, he bequeathed a Church and gave it his authority to teach and act in his name. That Church is the Catholic Church of today, albeit in more developed form.

So if you crave the truth, if you want to follow the evidence wherever it leads, then join me and a billion others in the Catholic Church! You’ll experience more beauty, goodness, peace, and purpose than you’ve ever imagined. (And if you doubt any of those three facts, pick up my book, Why I Am Catholic, for a more thorough defense!)