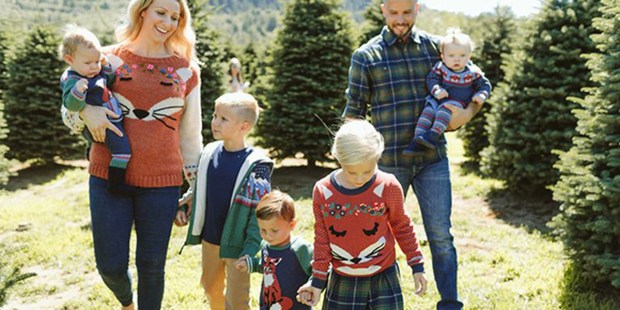 You may be one to simply ignore or brush off what you see in advertising, but there’s no denying that it has a certain effect on all of us, whether we realize it or not. Which is why we love Hanna Andersson’s new campaign featuring numerous families with more than two kids. It’s not every day that a family with more than one or two children can be spotted around town (unless you’re doing your weekly Costco shopping trip, and even then, it’s rare), but despite the fact that large families are less common these days, they do in fact exist, and we think it’s wonderful that this Swedish-influenced, Oregon-based company is featuring them.

Research tells us that on average, Americans see somewhere between 4,000 to 10,000 advertisements in a single day. These images and words have an effect on the way society functions, on the way we see the world. Ads tell us what we may need (but didn’t quite know it yet), pique our desires, and often portray a life that perhaps we hope to someday attain. They reflect a culture’s values — for better or for worse — and sometimes offer a barometer on our nation’s political and social climate.

So think about it … when’s the last time you saw an ad that featured a family with more than one or two children? Most ads today highlight the perfectly symmetrical family of four: one boy, one girl, no more, no less. Marketers aren’t blind to the realities of the changing American family — plenty of commercials are featuring single fathers doing the laundry, multiracial families that include members from different cultures and countries, and many other variations of what was once considered the “norm.”

But why, then, are are companies largely leaving out families that don’t easily fit into a four-door sedan? While Hanna Andersson proudly displays families with three, four or even more children, it’s almost impossible to find any campaigns that do the same.

I know because I googled like crazy to find some. Most ads targeting families look a little something like this:

Mr. and Mrs. Stock Family and Kids look happy enjoying their perfect life, don’t they? There’s nothing wrong with positive portrayals like this. But what happens when more children are added to the equation?

Take a look at this one, an ad for a television service:

There’s an impression that having four children has made these parents desperate for escape. Rather than showing a family enjoying something together, these children are unsupervised and neglected, while the parents are simply ignoring them in order to pursue their own comfort.

In searching for more images of big families portrayed in the media, it was almost impossible to find any positive ones, save this one for Dolce and Gabbana, in which this mom has more than a few littles to care for.

Our culture can be so obsessed with comfort, and any parent knows that children can sometimes infringe on that coveted “me time.” Parenting sites and mom-blog forums are full of the “need more wine” jokes, with moms bitterly counting down the hours to bedtime. Sure, parenting is one of the hardest things we do (especially parenting 2- and 3-year-olds, am I right?), and every parent deserves a break, but so often it seems that most depictions of large families in advertising only show chaos — wild children and exhausted parents reaching for the wine, the chocolate, the remote.

Hanna Andersson shows something different than children climbing walls and exasperated parents throwing their hands up. Instead, there’s a sense of warmth, love, generosity and closeness that radiates from their photos. Their choice to depict bigger families seems quite deliberate — in nearly every “family photo,” there are at least three children present, and many photos include grandparents, and family pets, as well as multiple kiddos. (We reached out to Hanna Andersson for comment, by the way, but they didn’t get back to us — too busy with all those kids, we assume.)

The lineup includes many beautiful pictures of multiracial and multiethnic families as well. Not only does the company sell children and women’s clothing, but there’s a special line of “Family Matching” pajamas in which there are sizes and cuts of the same adorable print for each member of the family — from mom and dad all the way down to the family pet. The families pictured here are relaxed (after all, they’re wearing matching jammies!) and comfortable — laughing, snuggling, playing together and having a wonderful time just being together.

Sure, big families aren’t perfect (no family is!), and they’re not better than small families, but they are certainly something to be celebrated, especially in an age where they can almost seem non-existent. Hanna Andersson reminds us that big families are out there, too, and that it’s wonderful to have a whole bunch of kids running around the house. Especially if everyone’s wearing matching Christmas jammies.