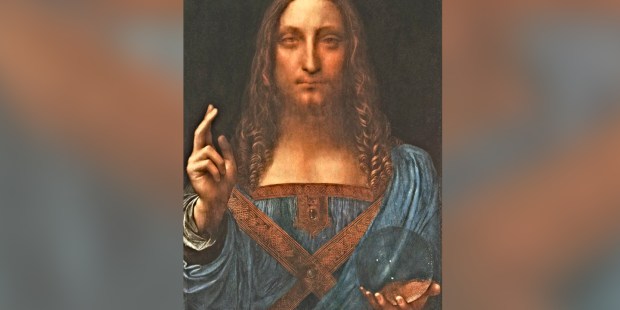 Long thought to be lost, the painting is considered the “Holy Grail of art rediscoveries”

The last painting by Leonardo da Vinci in private hands will be sold at auction next month, Christie’s announced.

With a pre-sale estimate of  $100 million, Da Vinci’s depiction of Jesus, entitled “Salvator Mundi” (Savior of the World) was until recently considered lost or destroyed.

The painting was found after its owner, whose family had purchased it at an auction for £45 in 1958, brought it to New York art dealer Robert Simon in 2005. Initially, according to a CNN report, Simon thought the painting might have been the work of Leonardo’s associates or pupils, which alone would have made it a valuable work of art.

After removing layers of varnish and paint from the painting, Simon and art conservationist Dianne Dwyer Modestini began to get an inkling that the painting, which depicts Jesus Christ with one hand on a crystal orb, and the other raised in a blessing, was by the great master himself.

What tipped them off?

First, there were pentimenti, corrections painted over but visible under special lighting, in the way Christ’s fingers are positioned and the draping of his stole. Da Vinci often reworked details of his paintings as he experimented with how to depict figures in space.

“I was looking at the curls and St. John the Baptist at the Louvre, who has this huge head of massive ringlets and they are exactly the same,” Modestini told CNN.

When Oxford art historian Martin Kemp was brought in to help authenticate the painting he told ARTIFINO that he knew right away the painting was a Leonardo.

“It was quite clear. It had that kind of presence that Leonardos have. The ‘Mona Lisa’ has a presence,” he said,

The painting, which is one of only 15 oil paintings by Leonardo in existence, was made for Louis XII of France between 1506 and 1513. Its existence was first recorded in the art collection of King Charles I of England in 1649

After Charles was executed and the English monarchy abolished, the painting was sold, and later passed to the Duke of Buckingham, whose son sold it at auction. In 1900, Sir Frederick Cook purchased the painting, which by then had been damaged by overpainting, and Cook’s descendants in turn sold it for a pittance in 1958.

After exhibitions at The National Gallery and the Hermitage in St. Petersburg, the painting was sold to Russian collector Dmitry Rybolovlev in 2013 for $127.5 million, making it the most expensive Leonardo ever purchased.

Since then the painting has been the subject of a legal battle between Rybolovlev and his former art advisor who acquired the painting for between $75 million and $80 million. According to a spokesman for Rybolovlev, after buying the painting, the agent then “flipped” it to Rybolovlev, pocketing $47.5 million, reported Artnet.

“Now, the forthcoming auction of this work will finally bring to an end a very painful chapter for the Rybolovlev family,” Rybolovlev’s spokesman said.