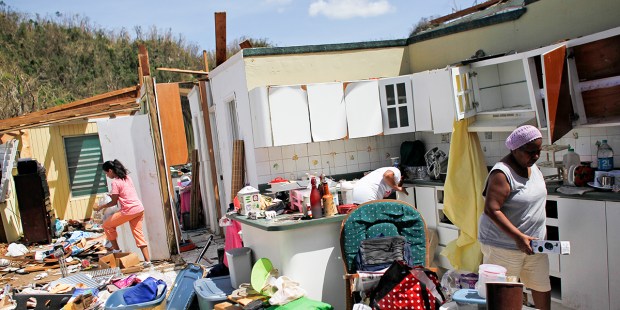 When hurricanes hit, there may be deaths from the initial destructive force of the winds, and drownings from subsequent flooding. But three weeks after Hurricane Maria’s winds passed and floods subsided, people are still dying in Puerto Rico.

The Category-4 hurricane completely wiped out the island’s electrical grid, and most people—and hospitals—are still without regular power.

“Because of the electricity situation, a lot of people died, and are still dying,” Lisandra Figueroa, 30, told the New York Times. “You can’t get sick now.” Her father, Harry Figueroa, 58, died last week after going for a week without the oxygen that helped him breathe. The situation is impacting people who need dialysis: many are getting treatment 25% less because dialysis centers lack a steady supply of diesel to run generators. Hospitals are running low on medicine.

The Navy hospital ship USNS Comfort has been receiving patients off the coast of the U.S. commonwealth, and the federal government has sent 10 Disaster Medical Assistance Teams of civilian doctors, nurses, paramedics and others to the island. Four mobile hospitals have been set up in hospital parking lots as well.

As utility crews work to restore power to 36 hospitals, the Army Corps of Engineers is installing dozens of generators at medical facilities

Still, there have been 43 fatalities directly related to the hurricane, including those from medical situations. The mayor of Canóvanas, in the northeast part of the island, reported that several people in her city had died of leptospirosis, a bacterial disease that can be transmitted through animal urine in floodwaters. The Times said:

In addition, there has been much assistance from churches and non-profit agencies in the United States. The Catholic Diocese of Brooklyn, where many Puerto Ricans live, Bishop Nicholas DiMarzio has encouraged pastors to take up collections of material goods to send to the island. People are asked to donate items like bottled water, non-perishable canned food, baby food, formula, diapers, and personal hygiene products. Goods collected will be packaged by Catholic Charities and flown to Puerto Rico on JetBlue Airlines. Catholic Charities there will arrange for distribution of the items to hurricane victims.

The Knights of Columbus has donated $100,000 to Puerto Rico to aid victims the hurricane.

Florida-based Food For The Poor is sending four pallets of medical supplies such as pain relievers, antibiotics, wound care kits, along with disaster and personal hygiene kits via airfreight to the island.