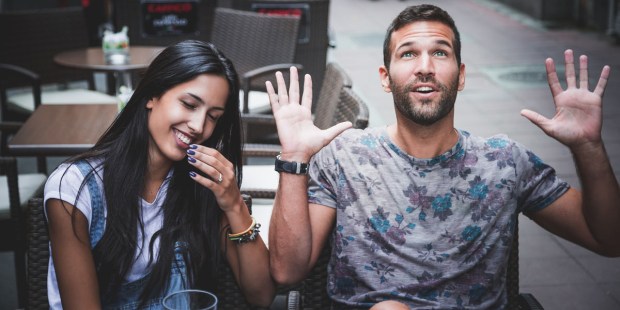 These two words helped Amy Poehler and Tina Fey build their careers … and they can help you, too.

It’s well known in the improv comedy world that responding to a question with the phrase “Yes, and …” opens up an incredible amount of opportunity for conversation and laughter. This simple phrase allows comedians to take what they are given and build onto it. But hearing what someone says and adding to their thoughts is a useful communication skill in so many more areas of life than just comedic routines. You can can implement this communication tool and improv (er, improve) your relationships with your spouse, family, and friends — no matter how hard the topic is to discuss.

Renew your use of “toddler talk”

In her research on communication, Dr. Lois Holzman, director of the East Side Institute for Group and Short Term Psychotherapy, found that that when we accept and build in our conversations, we are able to broach difficult subjects with ease. In early development, we used the “yes, and … ” trick to develop our vocabulary and communication skills from our early babbling days. As little kids, we sputtered out a few phrases, and learned as our parents repeated those words back to us and added on new vocabulary. We learned from observation, listening, and the way those with a better grasp of language communicated with us.

But as we grew, we left this skill behind as we became more proficient in language skills. Once we hit our toddler years, we stopped hearing “yes, and …” and began to hear “no” more often as we explored the world around us. Yet in our adult years, it’s time we renew our use of “yes, and …” to build and strengthen our communication with those we love.

Dr. Holzman’s recommendation to include more of this improv comedy trick in our daily conversation doesn’t mean that we can never say “no” again. But she is suggesting that we take a hard look at how negativity still affects our communication skills years after our days as toddling kids. “Take the ‘negative temperature’ of your conversations and those around you,” Dr. Holzman recommends. “Are they filled with denials, rejections and negations of what someone says? Do they more often than not get tense, lead to some bad feelings, turn into an argument or go nowhere? Do they have to?”

Think of conversation as a collaboration

In order to incorporate more “yes, and … ” into our conversation as adults, Dr. Holzman recommends that we accept what someone is saying in conversation and build onto it with our opinions and knowledge. “It is simply, gloriously — and literally — a humanizing way to relate!” she writes.

Read more:
Thomas Merton figured out what we need to “make peace”

“By saying yes, we accept the reality created by our partners and begin the collaborative process,” add Charna Halpern, Del Close and Kim Johnson, comedic pioneers and co-authors of the book Truth in Comedy: The Manual for Improvisation. Saying “yes, and …” doesn’t mean you have to think that everything someone is saying is correct or your opinion. But by acknowledging the reality of where they’re coming from in conversation, you’re letting them know that you’re listening intentionally and you value what they have to say.

Take a moment to consider the speaker’s opinion before reacting

When we disagree with someone, it can feel almost like second nature to correct what we think is incorrect in their opinions or logic. “What feels like the right thing to do in these situations is to negate the person — to correct the ‘facts,'” Dr. Holzman writes. “It feels right because we’ve been socialized into the knowing paradigm.” But when we automatically reject the thoughts another person offers us in conversation, we’re ultimately saying that we know better than they do. And there’s nothing that shuts down conversation quicker than feeling inadequate.

If we take time to appreciate other people’s opinions and backgrounds, we force ourselves to pause. This gives us time to formulate an intentional response, not just a reaction. “If you do this, other ways to respond just might occur to you,” Dr. Holzman writes. “Maybe you’ll let yourself be curious. Maybe you’ll take it as an offer to explore your differences. Maybe you’ll give you and your conversational partner a new challenge.”

The next time you’re in conversation with someone, put this tried and true comedic trick to work. Even if the conversation is about a subject you disagree about, you’ll be able to accept where someone is coming from and build the conversation with your thoughts as well. Because you’re acknowledging the other person’s opinion instead of automatically dismissing it, you’ll build trust in your relationships and improve your listening skills at the same time.

The “yes, and … ” improv comedy rule of thumb has helped build the careers of famous comedians such as Amy Poehler and Tina Fey. But it can also build up the communication in your own relationships as well. And who knows? Maybe your open communication skills will ease up your conversations and bring more laughter into your life, too!

Read more:
Struggling to make new friends? Here’s the secret to having those first conversations