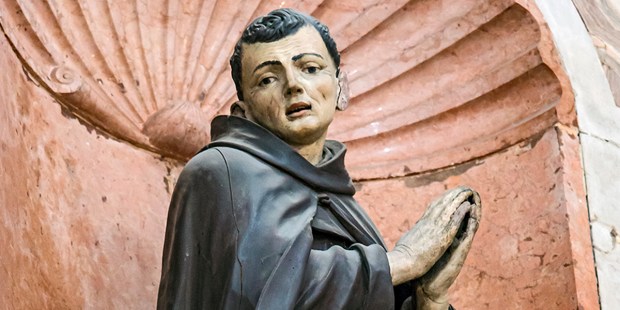 A common belief is that the hands-folded posture was derived from a Roman practice symbolizing submission.

Click here to launch the slideshow
Should believers fold hands, keep their arms outstretched with palms facing upward (the classic orans position) or cross them, like monks often do? Does it really matter? While it may seem strange, this is an important question to ask. In fact, it is a fundamental aspect of prayer, and one that allows believers to discover their own practices as rooted in ancient, venerable traditions.

Many can remember being taught by religious sisters how to pray with folded hands. One individual recounts (whether true or not) the reason the sisters taught him for folded hands.

Pray with hands folded up so that your prayers will go to heaven.

If your hands are pointed down your prayers will go down to hell.

And if your hands are sideways, your prayers will bounce all over the room.

Sure, this is quite naive, and chances are the actual instruction was lost in kid translation. Truthfully, the real reason most believers fold their hands in prayer has much deeper symbolism. In Christianity, the tradition has its roots in the customs of ancient and late-antique cultures.

Read more:
In what posture did the early Christians pray?

In the Jewish tradition, there is evidence in the Talmud that some prayed with hands folded as early as the post-Exilic period and even continued after Christianity was established. According to the text, the Jewish Babylonian sage, Rabba (Abba ben Joseph, C. 280-352), used to pray with his hands folded. Some historians believe that early Christians adapted this custom from their Jewish heritage.

But another common belief is that the hands-folded posture was derived from a Roman practice symbolizing submission.

Religious historians trace the gesture back to the act of shackling a prisoner’s hands with vine or rope: joined hands came to symbolize submission. In ancient Rome, a captured soldier could avoid immediate death by joining the hands together. Just as waving a white flag today, the message was clear, ‘I surrender.’

Centuries later, subjects demonstrated their loyalty and paid homage to their rulers by joining their hands. In time, clasping the hands together communicated both an acknowledgement of another’s authority and one’s own submission to that authority.

Read more:
Is there a correct posture for private prayer?

This type of joining hands to profess loyalty is still evident in the liturgy of ordination. A bishop will clasp the hands of the priest he is ordaining and say, “Do you promise respect and obedience to me and my successors?”

Another aspect of the folding of hands includes crossing the thumbs, which many have been instructed to do in the form of a cross. All of this results in a gesture that represents loyalty to God, pointing our prayers to heaven and being reminded of the cross of Christ. While Christians are not bound to pray with hands folded, it is a meaningful option, with ancient roots and profound symbolism.

Make sure to visit the slideshow below to discover the meaning of hand gestures in icons.