The true mark of a great mother 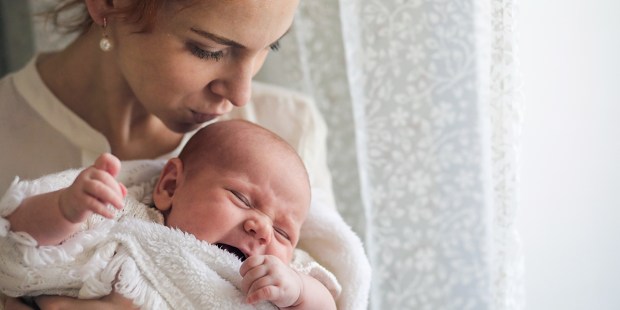 Some encouragement for all the mothers who think they are constantly letting their children down.

When my third baby, Liam, was a week old, I left him sleeping in the middle of the couch and went to the kitchen to make lunch for my other two kids, who were quietly coloring in their bedroom. Within seconds of starting to spread peanut butter across a slice of bread, I heard a floor-shaking thunk, followed by an agonizing moment of silence.

I had already begin sprinting toward the couch during that terrible silence, the bread and knife clattering onto the counter behind me. I was halfway across the kitchen when I heard the sweetest and most terrible infant scream I’ve ever heard, and had scooped him up in my arms before he ran out of air.

I was not surprised to see my 18-month-old daughter standing over her brother, one chubby finger in her mouth and her eyes wide with fear. I had to turn away from her to keep my apoplectic mama-bear rage from spilling out at her, since of course she hadn’t pulled the baby off the couch to hurt him. She just wanted to see him and couldn’t manage to pull herself up, so she did the most logical thing. She pulled him down. It wasn’t her fault.

It was mine. For an instant I hesitated, afraid to call the doctor in case they reported me to CPS, and as soon as that instant passed I berated myself even more intensely for letting my fear be more important than my son’s life. In that moment, I knew beyond a shadow of a doubt that I was the worst mother that had ever or would ever exist. I knew that my children would be lucky just to survive my incompetency, and that the damage they would sustain would be unmitigated.

Read more:
How I learned to deal with the loneliness of motherhood

That memory came flooding back when I read Elizabeth Mannegren’s post at Scary Mommy, about how she dropped her infant son on a tile bathroom floor.

We heap blame upon ourselves. Amidst the injuries and accidents, mom guilt abounds. Why didn’t we foresee this? Why couldn’t we have prevented this? But as horrible as we may feel, one-time accidents like this do not immediately transform us into “bad” parents. If they did, there wouldn’t be any “good” parents left.

During our brief stay, the hospital staff tried to reassure us that they “see this sort of thing a lot.” I had expected the nurses to judge me, to lecture me on how I should have had a stronger grip on him, how I should have been a better mom — all the things I was already mentally beating myself up over. But as I promptly broke down in front of the first nurse I saw, she simply smiled and nodded sympathetically: “It happens. I dropped my daughter when she was a couple months old … onto a concrete parking lot.”

As it turned out, our pediatrician had had the exact same experience with her second baby … even down to the peanut-butter-sandwich-making. She was both sympathetic and reassuring, and reminded me to put the baby out of his sister’s reach from now on. She even commended me for not yelling at the toddler. And fortunately, my son was fine.

This memory might be the strongest, but my years of motherhood are filled with similar ones. My conversations with other mothers often revolve around our own feelings of guilt and inadequacy, and the fear that we are letting our children down.

But as my friends and I remind each other, the very fact that we worry so much about our kids is proof that we’re not the world’s worst mother. Of course we make mistakes — we’re human. What makes us good mothers is that we recognize our mistakes and learn from them, and keep on loving our kids and learning from them. That’s actually the mark of a pretty great mother.

Read more:
Everyone criticizes mothers, and they feel quite free to