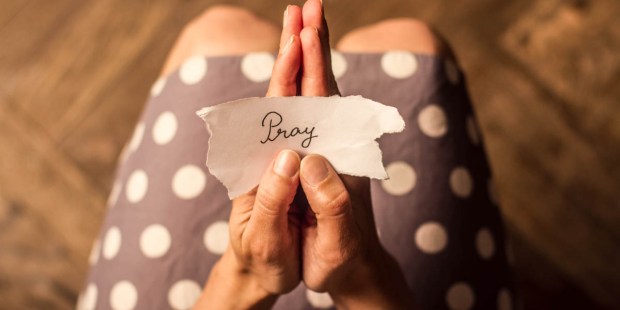 Sometimes your request is for something tiny. Sometimes it’s crushingly large.

You know who you are. Do you sometimes worry that you’re annoying people with your constant, casual prayer requests, or that you should only ask people to help you pray for the big intentions, the ones that matter? Stop worrying. I want to say to you: Please, never stop bothering us by asking us to pray. You’ve saved my limping faith more often than you know.

There’s this prayer in the Mass called the Rite of Peace, where the priest prays,

“Look not on our sins, but on the faith of your Church, and graciously grant her peace …”

It always makes me want to laugh, because it seems like Father is basically asking God to just pay attention to what we do right, and if God could just not focus so much on our sins, well, we’d really appreciate it.

He’s asking this because we know perfectly well that if God focuses on our sins, we’re never going to have peace. But if God looks on the faith of the Church as a whole? That might work better.

It’s a very human prayer. It shows just how much we lean on God’s mercy for everything we have, and more than that, it reminds us that we don’t have to go it alone. We’re part of something much bigger than ourselves — the Body of Christ — and that the faith of the whole Church can make up for what’s lacking in our own souls.

Whenever you’re humble enough to ask people to help you pray for an intention, any intention, you’re reminding me that even when I don’t think God is listening, you at least think that he is. Your own faith makes up for what is lacking in my own.

Sometimes your request is for something tiny. (“Can you say a prayer I can get this insurance stuff figured out quickly?” “Can you pray my sore throat clears up?”) Sometimes it’s crushingly large, like the prayers you ask for hospitalized friends, for people who’ve lost homes in the wildfires or hurricanes, or for total strangers facing unendurable tragedy. But whatever you’re asking, no matter the size, I want to personally thank you. Because when my own faith in the power of prayer flags, as it does more often than I want to admit, your faith fills in the gaps in mine, and reminds me to keep trying.

When I don’t have any hope for myself that the world can change, or even that I myself can change, and when I’m pretty sure God has bigger problems to deal with than my own, given his silence on the matter, that’s when I rely on the hope that my friends show.

You have no idea how powerful it can be to see somebody’s simple, direct assurance that if their friends join them in asking the Father for help, he’ll come through. Every time you ask your friends to pray with you, you’re sending a message to the world — to me — that it’s worth doing. That it counts. That God cares.

I’m beginning, cautiously, to follow your example, and start asking for myself, without worrying so much that people will be annoyed. Some of you go even farther than asking people to help you pray. Some of you have been heroic enough to actually offer. More and more often, I’m seeing people say something along the lines of “Hey, I’ve got a migraine today — send me your prayer intentions so I can offer up the suffering and not waste it!”

You guys are my heroes.

Evangelization can be really intimidating. Nobody wants to seem like they’re proselytizing, or come across as pushy, but when you are comfortable with asking your friends to pray with you, and confident enough to offer to pray for them too, that’s the greatest witness I can think of. If your faith is that strong, I figure, maybe mine will come around. Until then, pray for me, and I’ll try to pray for you, too.

Read more:
“Offering it up”: Is that still a thing?