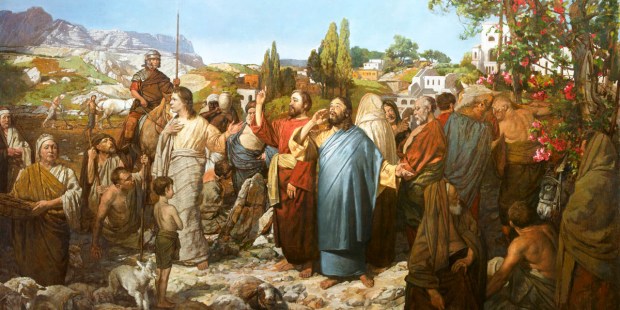 It’s true that everyone is welcome in Jesus’ house. But just showing up won’t cut it.

“The king said to him, ‘My friend, how is it
that you came in here without a wedding garment?’
But he was reduced to silence.
Then the king said to his attendants, ‘Bind his hands and feet,
and cast him into the darkness outside,
where there will be wailing and grinding of teeth.’
Many are invited, but few are chosen.”
—Matthew 22:12-14

This is a season of invitations. As the end of October approaches, many of us will be invited to Halloween parties and numerous parishes will send out information about special All Saints Day and All Souls Day services remembering those who have died in the past year. Then, only a short time later, family and friends will begin making plans for Thanksgiving. Few of us will have a chance to take a breath before the invitations begin to roll in for the pre-Christmas parties. It almost seems natural, then, that our Gospel this Sunday is a parable that begins with an invitation to a party.

In this passage, Jesus tells the story of a king who is hosting a wedding banquet for his son. Even though the invitation is from the king, the invited guests decline to attend. The king tries again. This time, the servants are told to tell the invitees about the menu as a further enticement: “Behold, I have prepared my banquet, my calves and fattened cattle are killed, and everything is ready; come to the feast.” And yet, the response is the same: “Some ignored the invitation and went away, one to his farm, another to his business.” Others of those invited took things a step further by abusing the servants.

What was the king to do? His son was still to be married and the banquet tables had been set. He orders his troops to punish the people who attacked his servants. But, more significantly, he told them to go out, “into the main roads and invite to the feast whomever you find.”

The king abandoned custom and convention. He defied the expectations of the culture and was prepared to welcome into the royal banquet hall anyone who would accept the invitation.

This message from Jesus would have been remarkable enough. He was telling a story that subverted the expectations of the culture. But Jesus doesn’t stop there.

Although the king would have known that the rich and poor, local people and foreigners, the well and sick would have been in the banquet hall, he still singles out a man whom he feels is not appropriately dressed for the occasion and he has him thrown out of the hall into the dark of night.

This certainly doesn’t seem fair. After all, the servants invited anyone and everyone at the king’s instruction. No conditions were given and the servants did exactly what they were told to do. But, as he does in other parables, Jesus is pulling the rug from beneath our feet. Remember, this isn’t just a nice story. Parables are intended to throw us off balance.

What’s at stake in this Sunday’s Gospel are the same themes of the end of time and judgment that we found in last week’s Gospel. And, like last week’s Gospel, this parable was originally intended for the religious leaders of Jesus’ day. But there is a message here for all of us: in accepting the invitation, the guests are still expected to ready themselves for the feast. And, as our First Reading demonstrates, this is God’s feast and the banquet is the Kingdom of Heaven. This is a feast to which all are invited, rich and poor, local people and foreigners, the well and the sick. But, by accepting the invitation, the guests—representing each of us—are expected to be dressed appropriately for the celebration: in garments of virtue and right living (cf. Colossians 3:12; Romans 13:14; Galatians 3:27). As Jesus says, “Many are invited, but few are chosen.”

Although the invitation to come together into the banquet hall is extended to people of all times and places and ways of life, we are being reminded in this Sunday’s liturgy that we are asked to do more than just “show up” at the banquet to which we have been invited. We are being asked to prepare ourselves for the feast by living lives of faith, hope, forgiveness, humility, and love—lives worthy of the Kingdom.

As you think of God’s invitation to be part of the banquet feast of Heaven, what are the virtues that you think the Divine Host will look for in the guests?

What does this parable tell us about God’s mercy and salvation?

Take time this week to pray that you might acquire the appropriate “attire” for guests of the King’s banquet feast.