Globalization, Catholic Style: When art came to the rescue 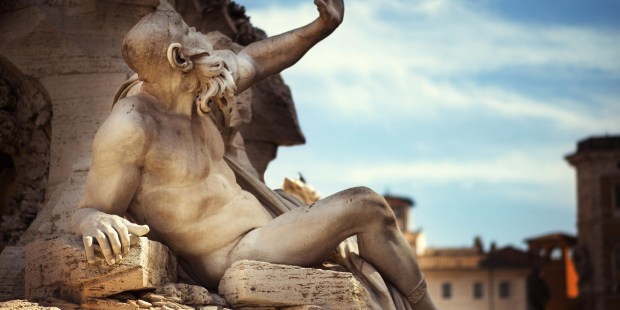 A visit to the Piazza Navona brings Bernini’s glorious image of Christian globalization: the light of Truth, spread to the four corners of the globe.

On the 500th anniversary of the Protestant Reformation, this series of articles looks at how the Church responded to this turbulent age by finding an artistic voice to proclaim Truth through Beauty. Each column visits a few Roman monuments and looks at how art was designed to confront a challenge raised by the Reformation with a soothing and persuasive voice.

Globalization may seem a concept of the new millennium, fostered by social media and multinational businesses, but the Catholic Church realized the importance of uniting the different peoples of an ever-expanding world long, long before Facebook was a twinkle in Mark Zuckerberg’s eye.

In 1511, Pope Julius established the first Roman Catholic diocese of the New World in Santo Domingo, with the intention of bringing the Gospel to these far reaches of the world, unknown to Europe until only a few years earlier. While the immediate crisis of the Protestant Reformation had slowed evangelical efforts, the papacy did not take long to find its missionary zeal and focus on these new frontiers.

In 1537, Pope Paul III became the defender of the human dignity of indigenous people when, in his Bull Sublimis Deus, he decried the greed of some merchant explorers who “are presuming to assert far and wide that the Indians … be reduced to slavery like brute animals, under the pretext that they are lacking the Catholic faith … by our Apostolic Authority decree and declare by these present letters that the same Indians and all other peoples — even though they are outside the faith —  … are to be able to use and enjoy this liberty and this ownership of property freely and licitly, and are not to be reduced to slavery …”

Matching the speed of the explorers, the Catholic Church, like Mary of the Visitation, hastened to bring the message of God’s love and freedom from the shackles of sin to all peoples, even those “hitherto unknown to us.” Much of the hurry was caused by the concern that Protestant Holland and England might reach these people first to teach of a salvation without sacraments, saints or pope.

Beyond protecting the liberty of indigenous peoples, Pope Paul III made another decisive move for the spread of the Gospel at this dawn of the age of discovery – approving the Order of the Society of Jesus, with the 1540 Bull  Regimini Militantis Ecclesiae. Founded by St. Ignatius of Loyola, this committed, educated, courageous group of young men chose to put themselves at the service of the Pope in his mission of exploration and evangelization. The Jesuit missionaries went out into the new worlds, bringing Christ and his teachings to all the known continents.

One of these Jesuits, St. Francis Xavier, would become the superstar of missionary work, walking from Rome to India and baptizing an estimated 30,000 people as he went. After ministering in India and Japan, Francis Xavier died in 1557, while awaiting entry into China. Beatified in 1619, Francis Xavier inspired many artists to try to capture in paint the zeal of the missionaries and the exotic locales in which they preached.

Peter Paul Rubens produced the massive canvas of the Miracles of  Francis Xavier in 1618 for the Jesuit church in Antwerp. At 175 feet high, it was meant to loom large over the congregation. St. Francis, majestic in his black Jesuit habit, stands calmly as marvelous events occur with tumultuous abandon all around him. In the upper left, demonic idols crack and fall while below a man is raised from the dead. A woman baptized during a difficult delivery stands below with her newborn child, while another man rises even as grave diggers prepare his burial. On the lower right, the lame and the blind approach looking for healing. The saint, lit from behind, points upwards towards the personification of faith and Christ’s cross of salvation, drawing eyes beyond himself to the Lord. Behind him, his companion carries the Gospel.

The delight Rubens took in attempting to represent the different features of the peoples of these new worlds is a great pleasure of the work. From the exotic topknot of the resurrected man to the varying different shades of African skin, to the Semitic traits of the official who wears his tall hat and yellow robes, the sheer variety of humanity illustrates the new look of the universal Church.

To organize this massive project of global outreach, Pope Gregory XV founded the Congregation of the Propagation of the Faith in 1622 — the same year he canonized both Ignatius of Loyola and Francis Xavier. The congregation was tasked with the transmission and dissemination of the faith throughout the whole world and given the specific responsibility of coordinating and guiding all the Church’s diverse missionary efforts.

The building housing the congregation, constructed under Pope Urban VIII, contains a stunning chapel by Borromini dedicated to the Three Magi, symbol par excellence of the Church’s universal mission. Exotic kings, thinkers and adventurers had brought their gifts to the infant Jesus. Sixteen hundred years later, the missionaries would go out into the world to bring the gift of Christ.

A little museum poignantly testifies to the efforts of the missionaries and of the administration that supported them. Type set in a myriad of languages underscores the importance of the written word in the communication of the Gospel, and the memorials to martyrs who died bringing the word of God to distant lands are reminders of the powerful witness of missionaries. For many years the amount of information lovingly collected and meticulously organized made the Propaganda Fide an early Wikipedia, amassing and sharing information about everything from recipes to laws to indigenous flora and fauna from all over the world.

The vastness of the mission and the energy of its faith was spectacularly expressed by Bernini’s Four Rivers fountain in the Piazza Navona. Pope Innocent X had made the University of Santo Tomas in Manila the first school to receive a university charter in Asia. The next year he hired Gian Lorenzo Bernini to design a fountain for the Piazza Navona that would incorporate an Egyptian obelisk as well as flowing water.

Bernini created one of Rome’s most beloved fountains as the perfect emblem for the Age of Discovery. The obelisk, of Aswan granite and inscribed with a hymn to the Roman Emperor Domitian, was found on the Via Appia. Egyptians had made obelisks as symbols of emanations from the sun god Ra; they were to be seen as beams of light sent from the heavens. Roman emperors brought them to the Eternal City as boasts of their own power. Bernini transformed the pagan object into a symbol of Christian illumination, raising it on a hollow base so as to appear to be descending from the skies. The dove and olive branch, symbol of Innocent X’s Pamphilj family, alluded to the covenant between God and Noah for the salvation of all mankind.

The obelisk hovers above four platforms hewn out of rough stone, upon which recline personifications of the main known rivers of the world. The Nile poses next to an expertly carved palm tree and crouching lion, its head covered because of the then-unknown source of the river.

The confidence of the age discovery is evident in the figure pulling up  the veil – they may not have found the origin of the river yet, but they are certain that they will. The Ganges, next to him, carries a long pole to allude to its navigability, but the strange sea serpent curled around it evokes the exotic animals of the east.

The Danube, for Europe, sits complacently by a rearing horse, while another fanciful figure reclines almost in fear of the light streaming from above.

This statue represents the Plata river between Uruguay and Argentina. The facial features show a lack of knowledge of the somatic traits of the people of South America, and the peculiar lizard-type creature indicates Bernini’s unfamiliarity with local fauna. But the carefully carved coins under the hip of the figure indicate the awareness of the wealth of the new world.

The four figures are contained within a circular basin with water flowing from the spigots around the statues to the edges — the globe that contains such marvelous lands and wondrous creatures. Bernini gave the world a glorious image of Christian globalization, the light of Truth, disseminated to the four corners of the globe through the work and care of the Holy Father and his missionaries.