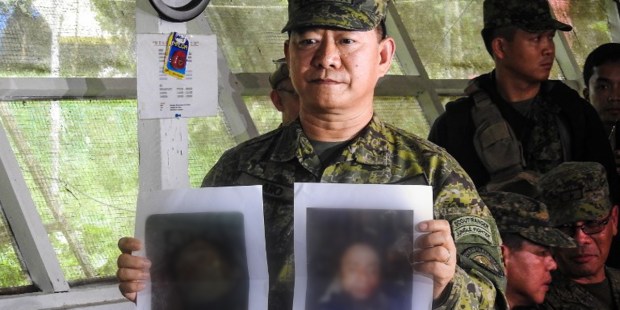 Ferdinandh Cabrera | AFP
Philippine military chief General Eduardo Ano shows images of Islamic militant leaders Isnilon Hapilon (R) and Omarkhayam Maute (L) during a press conference at a military camp in Marawi on the southern island of Mindanao on October 16, 2017.
The head of the Islamic State group in Southeast Asia, who figures on the US "most wanted terrorists" list, was killed on October 16 in the battle to reclaim a militant-held Philippines city, officials said.
Share
Print
John Burger - published on 10/16/17

Two of the Philippines’ most wanted terrorists were killed in a raid Monday on the island of Mindanao, according to the Philippine Star.

Military sharpshooters killed the jihadists before dawn as security forces made their final push to retake the city of Marawi from the Maute militant group. The terrorists took over the city in May, kidnapping about 15 people praying in Cathedral of Our Lady Help of Christians there, including a priest, nuns, and some lay persons, and setting the church ablaze. They also beheaded a local police official.

One of the brothers, Omarkhayam Maute, along with Abu Sayyaf leader Isnilon Hapilon, were killed in Monday’s raids. They were shot by elite Army Scout Ranger snipers at separate locations.

Maute’s brother, Abdullah, is believed to have been killed in September. Eight other foreign terrorists – mostly Indonesians and Malaysians – are believed to be still holed up in Marawi, authorities told the Star.

Though Monday’s victory was celebrated, one expert in the Islamic affairs in Mindanao said that there is much work yet to be done.

“Now a battle of ideas begins. Violent extremism against respect and building of peace and common good; Islamic radicalism against dialogue, coexistence and inclusiveness,” Father Elisha Mercado, head of the Institute for Autonomy and Governance at Notre Dame University in Cotabato City, said in an interview with Fides news agency. “To win this, a global approach, not just military is needed.”

Father Mercado, a missionary of the Oblates of Mary Immaculate and a consultant of the Presidential Office for the Peace Process, said it is urgent that, in the Muslim majority areas of Mindanao Island, the government work hard for education, employment, economic development, eradication of poverty, and infrastructure development. “Only then one can destroy the grounds of terrorism, financed from abroad, and weaken the influence of radical groups on the Muslim population of Mindanao,” he said.

He noted that as Marawi looks forward to a period of reconstruction, other cities of Mindanao, such as Zamboanga, Cotabato, Iligan, are subject to terrorism. He argued that only integrating Islamic communities into Philippine society, pulling them out from marginalization and poverty, will undercut the effectiveness of terrorists among the Filipino populace. “The approval of the Bangsamoro Basic Law, which establishes a new autonomous Muslim region, could help,” he said. In this framework, the Church “promotes a full-fledged dialogue and a new, large-scale Islamic-Christian cooperation platform.”

The Marawi battle resulted in the deaths of more than 800 militants, 162 government forces and 47 civilians, according to authorities.

President Duterte ordered aerial bombing of the militants’ positions, sending them into retreat but leaving the city in ruins, the Star noted.

The Philippine military retook the cathedral in late August, and Father Teresito “Chito” Soganob, the priest who had been held captive along with several parishioners, was rescued Sept. 16.

Monday’s military operations also led to the rescue of 17 hostages. About 20 others are still being held.