Pope: I want to give you some advice: Never abandon the rosary 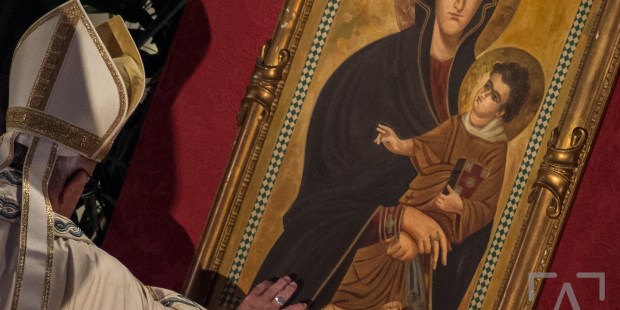 Antoine Mekary | ALETEIA
Pope Francis celebrates the Corpus Domini after a procession from St. John at the Lateran Basilica to St. Mary Major Basilica to mark the feast of the Body and Blood of Christ, on June 18, 2017 in Rom
Share
Print
I.Media for Aleteia - published on 10/16/17

The Christian who stays close to the Virgin Mary is “like a child near his mother.”

These were the words of Pope Francis in a video message to the people of Portugal for the closing of the centennial of the Marian apparitions at Fatima, posted on YouTube on October 13, as reported by Vatican Radio.

The video was played on screens at the Fatima shrine.  The pope warmly thanked the Portuguese for their response to his trip to Portugal last May 13, and assured them that the Christian who stays close to the Virgin Mary is “like a child near his mother,” who should never be afraid.

Respect for life is another topic the pope has recently spoken about. “We are called to defend and safeguard human life, especially in the mother’s womb, in infancy, old age and physical or mental disability,” he tweeted the next day.

In his message for the World Day for Life, last February, the Pontiff called for prayer for “babies who are at risk of the interruption of pregnancy, as well as those who are at the end of their life—every life is sacred!—so that no-one be left alone and that love defend the meaning of life.”