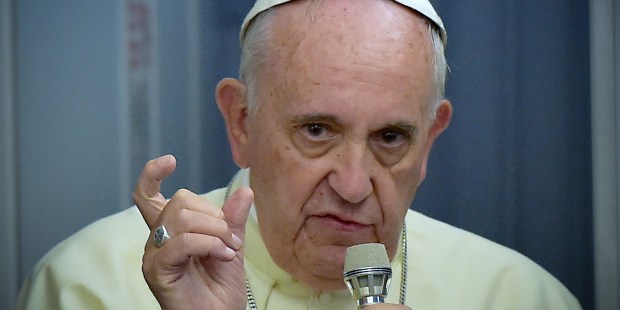 VINCENZO PINTO / AFP
Pope Francis gestures to journalists during a press conference on July 13, 2015, onboard a plane on his way back to Rome from Paraguay, the final stop of his South America tour. Pope Francis departed Paraguay , bringing to a close a weeklong visit where he drew attention to the poor and marginalized in some of the region's poorest nations.
AFP PHOTO / VINCENZO PINTO / AFP / VINCENZO PINTO
Share
Print
I.Media for Aleteia - published on 10/17/17

In new book, Francis explains why he’s willing to give interviews, despite the risk of misinterpretation

Interviews with journalists “are a dialogue, not a lecture,” says Pope Francis in a book about his way of communicating, extracts of which were published by the Italian daily La Repubblica today. Titled “Adesso fate le vostre domande” (“Now, ask your questions”), and written by Antonio Spadaro, director of the Jesuit magazine La Civiltà Cattolica, the book will be available in Italian this coming October 21.

During his trips, the pontiff relates in the book, “I like to look people in the eye and answer their questions with sincerity.” Pope Francis acknowledges, however, that he must be careful: “I always pray to the Holy Spirit before starting.”

The Successor of Peter says that he seeks to answer “spontaneously,” while being understandable, and without speaking with “rigid formulas.”

“For me, interviews are a dialogue, not a lecture,” he says. That’s why, he admits, he never prepares for interviews, which sometimes makes him fear being misinterpreted. It’s a pastoral risk he’s willing to take.

Interviews “always have pastoral value,” like everything he does, he stresses. The pope says that the way he answers questions in his interviews is the same way that he delivers his homilies at Santa Marta, “his parish.”

“I need this communication with the people,” he says. The pontiff also wants a “Church that knows how to insert itself into people’s conversations,” a perspective which he brings to his interviews.

“I have the nerve, but I am also very shy,” he admits. In his opinion, trust is fundamental; without it, he would never grant an interview. Trust, Pope Francis assures, “is the form of communication of my ministry.”

It is customary for Pope Francis to give a press conference at the end of his apostolic visits. Several of these conferences have made world news, when the pope has addressed hot-button issues such as immigration, politics, or even the apparitions in Medjugorje.