Viking funeral clothes found may have “Allah” embroidered on them 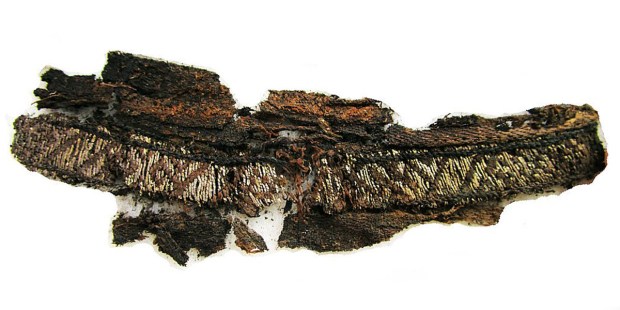 Discovery, while disputed, could raise questions about the interaction between Muslim and Nordic cultures.

Archaeologists in Sweden made a surprising discovery while examining Viking burial costumes excavated from 9th- and 10th-century graves, according to a BBC report. Embroidered on the clothes, according to the researchers, were the words “Allah” and “Ali.”

The discovery, if verified, might shed light on the interaction between Muslims and Scandinavians and the influence of Islamic culture on Scandinavia. After the researchers’ findings were publicized, however, several experts have come forward disputing their conclusions (see below).

The study, conducted by textile archaeologist Annika Larsson of Uppsala University, was initiated after it was discovered that the material had come from central Asia, Persia, and China. At least 10 out of 100 burial clothes examined bore the inscriptions.

The burial costumes, found in male and female boat and chamber graves, were first discovered in the late 19th- and mid-2oth centuries, and have been kept in storage for the last 100 years.

According to Larsson, at this point it is not clear whether the people buried in the Viking graves were Muslim, or whether the Vikings simply adopted Muslim customs.

“The possibility that some of those in the graves were Muslim cannot be completely ruled out,” she told the BBC.

“We know from other Viking tomb excavations that DNA analysis has shown some of the people buried in them originated from places like Persia, where Islam was very dominant.

“However, it is more likely these findings show that Viking age burial customs were influenced by Islamic ideas such as eternal life in paradise after death,” she said.

The Swedish team of archaeologists is now working with university researchers using genetic, immunological and pathological testing to determine the origin of the bodies buried in the Viking graves.

In response to news reports, an article in Digg.com published on October 16 questions the validity of the Swedish researchers’ findings, and suggest that the funeral clothes may not actually say “Allah” on them.  The website quotes textile specialist Carolyn Priest-Dorman saying that Larsson’s conclusions are “predicated on unfounded extensions of pattern, not on existing pattern.”

The article goes on to suggest that the “style of epigraphy that Larsson used when interpreting the Viking textile was not actually in wide use until 500 years after the textile was made.”