What would it take to get the drowned man to stop complaining? 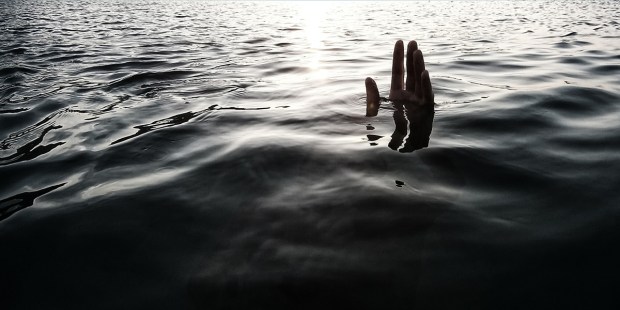 “Not Waving but Drowning”

Nobody heard him, the dead man,
But still he lay moaning:
I was much further out than you thought
And not waving but drowning.

Poor chap, he always loved larking
And now he’s dead
It must have been too cold for him his heart gave way,
They said.

Oh, no no no, it was too cold always
(Still the dead one lay moaning)
I was much too far out all my life
And not waving but drowning.

So there’s this dead man, but he’s complaining. People had been so wrong about him! He hadn’t been just playing in the water; he’d been drowning, only nobody noticed. He can’t stop rehashing it. You know the old ghost trope? The stereotype is that the ghost of a dead person comes back, maybe to the person who killed him, demanding justice, and insisting that the real story of his death be told. He is relentless, and eventually the person he’s haunting either goes mad, or somehow rights the wrong. Only then can the spirit can be at peace. It’s a theme that’s played through thousands of stories.

The idea here is similar. Some great injustice has been done to this man. He was gravely misunderstood, and those who could have saved him let him drown. The injustice was so great that even death cannot stop the complaint: “You had it wrong! I needed you!”

The response of the people he’s addressing is kind of pathetic. “Poor chap,” they say solemnly, as though they had been best buddies, “he always loved larking.” (Larking means being playful or mischievous.) The following “and now he’s dead” is infuriating. The speaker hasn’t tried to make the slightest bit of connection between the “larking” and the death. The half-explanation that follows — “It must have been too cold for him his heart gave way” — makes it clear that not only didn’t they know he was trying to get their attention, they didn’t even know, even after his death, that he’d drowned! They somehow chalked it up to a heart attack, which makes no sense.

The lack of punctuation in the explanation just makes it look like they weren’t even trying to understand. It makes the familiar way they’re talking about him seem as big an injustice as the death itself. It is, actually. If they’d actually known the dead man, they’d have taken his drowning seriously. His death is a result of their breezy attitude towards him.

Now the dead man gives the reader some new information: “It was too cold always,” he argues. “I was much too far out all my life.” It’s a hint that maybe we’re not talking about a literal drowning, here. Then, of all things, he starts agreeing with his too-late friends. It was too cold! Not just at the end, but throughout his whole life. The cold wouldn’t have been too much for his heart, though; his heart was used to it. It was his muscles that gave out, his ability to stay above water alone, for so long, without help.

The loneliness that comes from being hated is one thing, but the loneliness that comes from being misunderstood and dismissed is worse. So it wasn’t just their innocent misunderstanding of his frantic gestures that led to his death. On a deeper level, the problem was that this man’s community, as essential to human life as oxygen, neatly labeled him, and never bothered to take a closer look.

Smith’s use of tense throughout the poem is positively wonky. She keeps switching us back from after the death to before it, and back after again. I counted; we end up crossing that bridge eight whole times, which is saying something for such a short poem! “Nobody heard him” refers to after he’s dead, but his complaint takes us back to when he was still alive. “He always loved larking,” is in the past, and “now he’s dead” pushes you back to the present. And although the death is current to the characters in the poem, it isn’t current to the reader. We are told the story from some point after it all happens, as when a fairy tale begins, “Once upon a time.”

It’s enough to make my head spin, and that’s the point. The poem forces us to jump between his life, his death, and after, making the connection that his friends couldn’t, or didn’t, make. If we, at least, can be made to understand that it was the circumstances of his whole life that caused his death, then the dead man can finally be at peace. The structure of the poem, despite how little information we actually get, leads the reader through the process of discovering the depth of the harm that was done to the dead man, and, if we’re reading closely, might well make us a bit more humble and careful.