Our Lady of Gietrzwald: Poland’s only approved Marian appearance 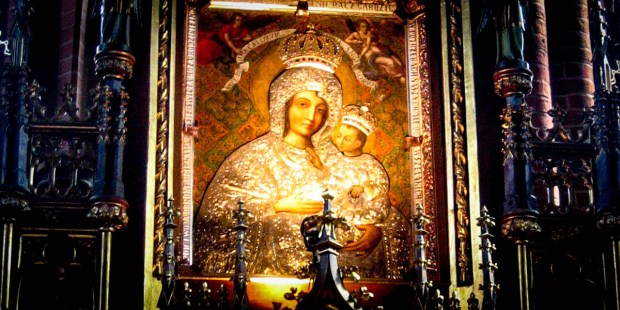 Like the Woman of Lourdes, she called herself the Immaculate Conception.

There is only one approved Marian apparition from Poland, and this year marks the 140th anniversary of the occurrence.

It was June 27, 1877. Thirteen-year-old Justyna Szafryńska was on her way home from church. As she heard the Angelus bells and said the prayer, she suddenly saw a strange light and a figure dressed in white on the nearby maple tree.

The Church in Gietrzwałd (German: Dietrichswalde) at this time was facing difficult circumstances. In 1873 the Polish language had been banned in all the schools in the region. As a result of the Kulturkampf, “rebellious” Catholic priests and religious congregations, with the exception of those actively involved in social work, were removed from Warmia.

Thus was the social context on June 27, 1877, when 13-year-old Justyna Szafryńska was on her way back home from the church in Gietrzwałd. She was making preparations to receive her First Communion and had just passed an exam administered by the parish priest, Fr. Augustyn Weichsel. As she prayed the Angelus, she saw a strange light and a figure dressed in white on the maple tree near the presbytery; the figure was seated on a gold, pearl-studded throne.

A moment later the girl saw the glowing figure of an angel; with golden wings, clad in white, the angel descended from heaven. When the young Justyna prayed the Hail Mary, the figure rose from the throne and ascended into heaven together with the angel.

The apparitions would continue for almost three months, concluding on September 16.

Justyna recounted everything to the parish priest, who told her to revisit the place on the following day. Again, as the Angelus bells were heard, the maple tree was brightly illuminated. A golden circle appeared around it with a throne of gold; two angels escorted the Blessed Mother to the throne.

When Our Lady was seated, two other angels brought Baby Jesus in a heavenly glow and placed Him on the left knee of Our Lady; the Child was holding the orb in his left hand. Still other angels were raising a crown above Mary’s head. Yet another angel brought a gold spectre and held it in the right hand above the crown. One more angel hovered above the entire scene, pointing to a cross.

On June 30, Our Lady appeared on Her own, unaccompanied by angels. Justyna, though, had with her 12-year-old Barbara Samulowska.

During the apparition Justyna asked: “What do you want, Holy Mary?” The reply she received was, “I want you to pray the Rosary daily.” Our Lady spoke in the local dialect similar to the Polish language.

On July 1, Justyna asked: “Who are You?” and heard in reply: “I am the Blessed Virgin Mary of Immaculate Conception.”

During July, Szafryńska and Samulowska were daily visited by Our Lady during the evening Rosary service. The girls asked the Lady about the health and salvation of various people, and also if the Church in Poland would be liberated. They also wanted to know if new priests would soon be assigned to the parishes in south Warmia, abandoned in the wake of the Kulturkampf.

In reply, the girls heard: “Yes, provided people pray fervently. Then the Church will not be persecuted and the orphaned parishes will receive priests!”

That day, Our Lady blessed a spring. Pilgrims have for years drawn water from it and healings have been reported.

Due to the increasingly difficult position of the Polish population in the Prussian state, the apparitions were seen as a powerful sign, a symbol of the defense of both Catholics and the Polish community. While the apparitions contributed to the revival of a Polish national spirit, in the religious sense they had a universal appeal.

Following the apparitions, both the visionaries entered the religious congregation of the Daughters of Charity (of St. Vincent de Paul), first in Chełmno and then in Paris.

Sr. Barbara Samulowska took the religious name Stanisława. She left Paris for the missions in Guatemala. She died there on December 6, 1950. On February 2, 2005, Archbishop Edmund Piszcz of Warmia inaugurated the beatification process of Sister Stanisława.

Justyna Szafryńska, in turn, left the congregation in 1897 and returned to lay life. In 1899, in Paris she married Raymond Etienne Bigot. But after 1904, history loses track of her, and it is not known where she is buried

While the apparitions were going on, the bishop of Warmia, Filip Krementz, convened a special commission of theologians to thoroughly examine the case. A 47-page report gave a favorable verdict, and the girls themselves were defined as “unassuming, simple, natural, and alien to any deceitfulness.”

In early September 1877, the bishop moreover asked three physicians to examine the visionaries during the apparitions. When the girls were seeing the Blessed Virgin Mary, their pulse slowed down, their upper and lower extremities got cooler and their gaze was fixated.

On September 1, 1977, centennial celebrations took place, presided over by the future John Paul II, Cardinal Karol Wojtyła, then metropolitan archbishop of Krakow. On that day Bishop Józef Drzazga of Warmia solemnly recognized the veneration of the Blessed Virgin Mary in Gietrzwałd. He issued a decree validating the credibility of the apparitions and proclaiming them as in compliance with Christian faith and morality.

[This article is translated and adapted from Aleteia’s Polish edition.]