Why nature should be your children’s playground 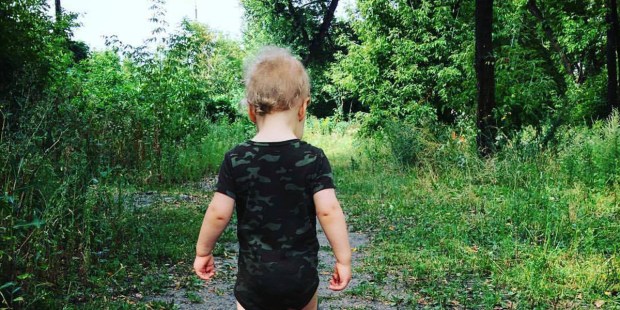 Even if you live in the city, here’s how to make sure you’re giving your kids the tools they need.

When I was pregnant, I was bothered by the view outside my window. It was something I never paid attention to before: children playing in the neighborhood sandbox all day long. What disturbed me wasn’t the fact that they were playing, but their limitations; the sandbox was not much more than two yards square. I felt bad for them whenever I saw them pouring sand from one side to another, and then back again. And then, of course, there was the group of helicopter parents sitting around this tiny playground and watching every move carefully, making sure that the children didn’t do anything risky, or as much as look at each other askew.

The road to Harvard leads through the forest

That’s when I decided that I (and my firstborn son) would never set foot in this or any other playground, even if I had to walk for miles in search of parks and forests. Intuitively, I felt that my boy would be happier running around in the forest, picking up sticks and bugs and observing snails, not to mention having pine cone-throwing competitions, and of course, jumping in puddles.

Recently, I came across an interview that further confirmed my maternal intuition. “If you want your child to go to Harvard, or to be a well-paid manager, let him play in natural outdoor surroundings, rather than at those boring, rubber-floored playgrounds,” argued Richard Louv in a conversation with Lukasz Dlugowski in “Large Format,” a publication of the Gazeta Wyborcza newspaper in Poland.

Today, my son is almost two years old, and indeed, we have managed to stay away from the confines of city playgrounds. Interestingly, he was never attracted by our local playground anyway; he would avoid it as we left the neighborhood, never showing any interest. Obviously, we couldn’t always go deep into the woods, but at least we would go to the meadow in the park where you can run barefoot with a ball, play with big soap bubbles, or chase your mother — yes, spending time in nature with a kid isn’t always relaxing for the parents!

Of course, encouraging our children to play a few games in the woods will not be enough to prepare them to go to a prestigious college — and that’s not the point. It’s not about sending our child to Harvard or Oxford. In fact, it’s not about planning our child’s life according to our ambitions at all, but about giving the child all the tools that will help him grow and build his own life — and a happy life, at that.

I decided to research the topic further, and find out why nature is so important for the proper development of children. Kasper Jakubowski, landscape architect and ecologist connected to the Ecological Movement of St. Francis of Assisi (REFA), has this to say:

“Scientists have been talking for many years about a ‘nature deficiency disorder’ in the current generation of children; that is to say, they show a group of developmental defects caused by a lack of contact with nature, among other factors. Such children suffer from overstimulation, meaning that they are overwhelmed by the excess of plastic toys, electronics, colors, sounds, and content. Meanwhile, nature is the source of what are sometimes called ‘soft fascinations’ — aspects of the environment that attract our attention in a calming, aesthetically pleasing, and non-threatening way, like clouds moving across the sky, the rustling of leaves, patterns in nature, etc. Contact with nature regenerates and improves concentration, and allows for physical activity and play with real objects,” he says.

Also, as the father of 5- and 3-year-old daughters, he sees with his own eyes how his children develop through close contact with nature. They explore it through their senses, and then they get to name what they’ve discovered. When allowed to do so, they are perfectly content playing in nature. “I love watching them from behind my book or newspaper, seeing them play for hours by a suburban stream. Only sometimes do I initiate the play; more often than not, nature writes her own stories for our urban or suburban expeditions,” Kasper Jakubowski explains.

Read more:
Kids would play outside more if it weren’t a criminal offense

Not every risk needs to be avoided

The problem is that formulaic play at boring playgrounds somehow became one of the more popular ways of spending time with the kids. “Public spaces in many neighborhoods are not conducive to engaging with nature. They do not give children a way to find release, and at most offer a set of bland and standard structures. New housing developments, often built at the expense of green spaces, are most often fenced in to keep nature out,” says Jakubowski. There is a growing recognition of the deficiencies of totally planned, controlled, artificially structured playground environments. He then gives the example of the United States, Great Britain, and Germany, where natural playgrounds filled with so-called loose parts are all the rage. “These are naturally placed, oddly shaped objects: abandoned logs, stumps, tree roots, bark, pine cones, branches, natural building materials … It’s up to the children to decide what they will do with them,” he says.

The demonization of nature is yet another problem. “Nature is seen as a source of danger: ticks, poison ivy and poison sumac, falling branches, kidnapping … Not to trivialize parental worries, but there needs to be a balance between parental control and children’s freedom,” argues Jakubowski.

How can we strike that balance? “Children have a natural need to get dirty. They need their parents to give them some room for experimentation and adventure, and to help them get up when they fall — not keep them from falling at all cost. If we eliminate risk, bumps, and bruises in bringing up our children, we should not be surprised when they have independence issues later in life. Neighborhood playgrounds, so often fenced in against strangers, say a lot about parents’ feeling about safety. What price will we pay for this illusion of comfort and peace?” asks Jakubowski.

Nature is closer than you think

REFA began a campaign promoting natural environments in and around the city of Krakow, Poland. What activities do they suggest? Nothing we cannot do quite easily: family nature walks ending with picnics, discovering urban jungles in parks, exploring meadows in larger parks, paying attention to butterflies and birds … The idea is to infect children and adults with a passion for being in nature and experiencing it. REFA also conducts classes in schools. “Really, you don’t have to leave the city. All you need is to make time for nature in your schedule,” Jakubowski says.

There’s one important thing we haven’t mentioned yet. How can we persuade kids to go outdoors — especially the older ones, who are already accustomed to spending time with a phone or tablet in their hand, and for whom walks in the forest are boring? According to Jakubowski, the ideal solution would be to make having contact with nature part of the school curriculum. “We need a balance between learning knowledge in the classroom, and being engaged in learning about the environment interactively. In western European cities, there are education centers for this purpose, geared to different age groups. They are often located near important nature sites. Nature needs to be made accessible in cities, and we need ideas for modern environmental education. Older children can volunteer in urban gardens, protecting undisturbed meadows and endangered species, or making small ponds. And as a parent, I can say this: we need to fast from electronics — that is to say, we need to restrict access to texting, tablets, and TV. Let’s make Saturday an offline day, and let’s spend it in the forest, by a river, or in a meadow,” concludes Jakubowski.

Read more:
Keeping kids clean is overrated – Here’s why you should let them eat dirt

Read more:
The best way to save the planet as a city-dweller