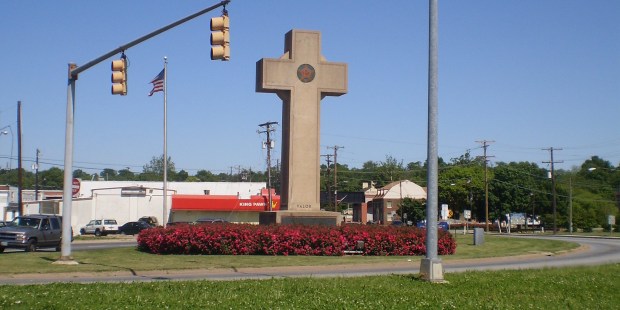 The monument was built in 1925 to honor local Maryland men lost in the war.

The cross-shaped memorial to World War I soldiers has stood at a busy intersection in Prince George’s County, Maryland, for 90 years. On Wednesday a federal appeals court declared it unconstitutional.

The 2-1 ruling by the U.S. Court of Appeals for the 4th Circuit said that the 40-foot-tall memorial “has the primary effect of endorsing religion and excessively entangles the government in religion,” reported the Washington Post.

Built in 1925 by the American Legion with the help of local residents, the “Peace Cross,” a cement and marble monument honoring the 49 Prince George’s County men who died in World War I, is part of a larger memorial park honoring veterans of several wars.

“The Latin cross is the core symbol of Christianity,” Judge Stephanie D. Thacker wrote. “And here, it is 40 feet tall; prominently displayed in the center of one of the busiest intersections in Prince George’s County, Maryland; and maintained with thousands of dollars in government funds. Therefore, we hold that the purported war memorial breaches the ‘wall of separation between Church and State.’”

In his dissent, Chief Judge Roger L. Gregory wrote that the First Amendment doesn’t require government to “‘purge from the public sphere any reference to religion.’”

Noting that the base of the monument bears the words “valor, endurance, courage and devotion,” Judge Gregory wrote, “I cannot agree that a monument so conceived and dedicated and that bears such witness violates the letter or spirit of the very Constitution these heroes died to defend.”

The challenge to the constitutionality of the monument was brought by the American Humanist Association, which claims on its website to advocate “progressive values and equality for humanists, atheists, and freethinkers.”

Unless the U.S. Supreme Court agrees to take up the case, a District Court judge will have to decide whether the monument should be removed. According to the Washington Post, in 2015 a District Judge declined to order the cross removed from public land, saying it “is a historically significant secular war memorial and that the government agency had a nonreligious reason for maintaining it.”

During oral arguments in December of last year, the Washington Post reported that Judges Thacker and James A. Wynn, Jr. had suggested that the cross might not have to be moved: the issue, they said, could be resolved by cutting off the arms of the cross to form an obelisk.