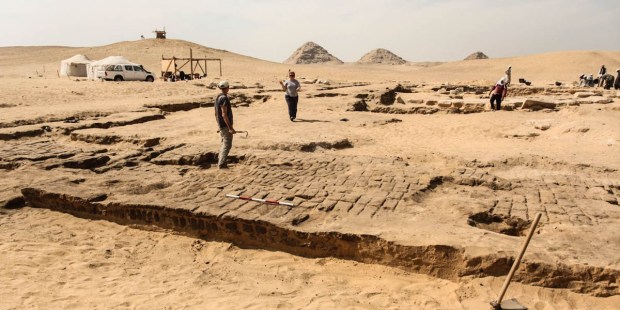 The discovery sheds light on the religious practices during the time of the great pharaoh, Ramses II.

Archaeologists in Egypt have discovered the ruins of an ancient temple that once belonged to King Ramses II, a pharaoh who reigned from 1279 to 1213 BC.

The discovery is considered groundbreaking because it confirms that as late as the 13th century BC, the sun god Ra was still being worshiped. The pharaohs of the Fifth Dynasty, 4500 years ago, first built Egyptian sun temples.

According to an article in the Independent, the temple is also the only evidence of the presence of Ramses II in the Badrashin area of Giza, south of Cairo.

The temple’s remains were adorned with reliefs related to the sun god Ra.

Ramses II, also known as Ramses the Great, is remembered as a great leader who expanded his kingdom from Syria in the east to Nubia in the south.

Earlier this year, archaeologists discovered a massive 3,000-year-old statue of Ramses II, submerged in the mud in a poor neighborhood in Cairo.

Ramses II was immortalized in a poem by Percy Shelly’s called “Ozymandias,” in which a “traveler from an antique land” comes across “two vast and trunkless legs of stone” in the desert.

On the statue of Ramses II, who was also known as Ozymandias, the traveler sees the words:

‘My name is Ozymandias, king of kings:
Look on my works, ye Mighty, and despair!’

And the poet, considering the shattered monument before him, ends with the reflection on the fleeting power and mortality of men, even great men:

Nothing beside remains. Round the decay
Of that colossal wreck, boundless and bare
The lone and level sands stretch far away.