Help! How do I escape the office gossip who thinks I’m her friend? 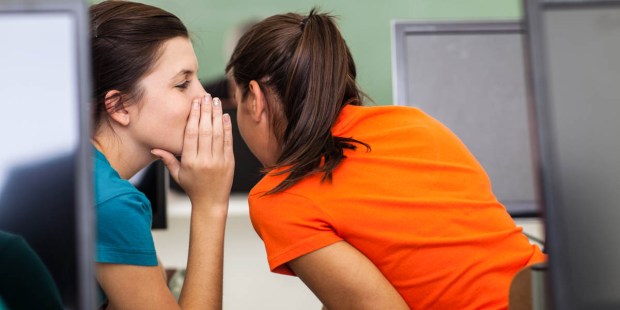 How to impose some boundaries without becoming an office bully’s next target.

Submit all questions to @askkatrina@aleteia.org

About eight months ago I started a new job at a local parish. Everyone is really nice to work with except this one woman, who is pretty aggressive. By aggressive, I mean she’s a pushy gossip. She’s really negative and talks about other people constantly. I’m hesitant to say anything because she’s been at the parish longer than anyone else in the office and honestly I’m afraid how she’d react if she found out I complained.

Because I am new she has sort of latched onto to me, and took it upon herself to “show me the ropes.” I appreciate a good mentor but I wish she could give me professional advice without trying to drag me into her gossip. When I first started my job and didn’t know anyone she offered to take me to lunch and I was grateful that she reached out. But now she wants to go to lunch all the time and bad mouth everyone — co-workers, the priests, and parishioners. She tells me personal stuff about them that I’d rather not know and talks about personal stuff going on in her own life that I would definitely rather not know about.

I left my last job because the people I worked with were really toxic and gossiped about each other which made the environment really uncomfortable. I don’t want to get caught up in more office drama. I took a parish job because I thought the people would be better here. The other people at work have started being standoffish to me now because they think this woman and I are friends.  I opened a huge cans of worms by letting her befriend me and I’m not sure how to get out of this, short of finding a new job. Do you think this situation is redeemable or do I need to dust off my resume again?

Toxic people are everywhere, and the Church is no exception. Unfortunately, you are stuck with this aggressive women as long as you and she work together and that’s the reality of it. But the situation doesn’t need to carry on as it has been.There are ways to get “untrapped.”

You ask if I think the situation is redeemable and I say that depends on what you mean by “redeemable.” What resolution are you hoping to achieve? Because your next course of action depends on the outcome you desire.

Do you simply want to find a way to tolerate this woman, or do you want this women to change and become a more likeable person? The first is doable. The second is an unreasonable expectation but not impossible; unreasonable because people only change when they really want to. Not impossible because you might be able to help her become self-aware enough to want to change.

In terms of tolerance, it’s more realistic to control your own behavior, as opposed to your trying to control hers. When we’re dealing with strong personalities, it’s important to get a sense of their perspective. This woman probably sees herself as a victim as opposed to the bully she really is. She thinks all her co-workers don’t like her, and she’d be right (although she doesn’t understand why), so she deals with it by talking badly about the people who shun her.

Understanding that her gossip is a defense mechanism may help you have a little more patience and compassion with her. Gossips tend to be insecure and think that having juicy gossip about another person makes them conversationally interesting. Offer something else to talk about with her — a TV show or movie, a hobby, pets, places you’ve visited.

Of course, some people just like to gossip and see the worst in everyone. As I said, toxic people exist and they are everywhere. Even innocent topics may lead a confirmed gossiper back toward gossip. If that’s the case, maybe you want to look for ways to stop this one-sided friendship from getting even further out of hand. Redeem the situation by re-establishing some boundaries, and reorient the relationship from personal to professional. Make yourself unavailable for lunch and blame it on your workload. Steer any personal conversations and gossip back around to a work-related subject. Make it clear you have no intention to engage in non-work related chatting.

The problem with establishing boundaries is that she may see it as a rejection, and then you’ll be the next person she gossips about.

Because that’s true, another way to rectify the situation would be to simply confront her behavior head on. Since you have established a semi-friendly relationship with her, it wouldn’t be out of place to just be honest. Begin by thanking her for guiding you with work advice, especially if she really was helpful. Then you can “confide” in her that that you have been feeling guilty and uneasy because conversations about co-workers seem too-often to veer into gossip, which is not good for either of your souls, or for the office. In a friendly way you can say, “Let’s try not do that; you can tell me if you think a conversation is falling into gossip, and I can tell you when I think it is, too!”

And if she still doesn’t get the hint, after all that honest understanding, compassion, and boundary re-establishment? Then you can always take it up the chain of command. You’ll need to have documentation with dates and times of incidents and any notes made about times you’ve addressed the behavior with her to no avail.

I’m not suggesting you should tolerate a bully in the workplace or remain in an emotionally unhealthy environment and if you ever feel that this lady can negatively affect your health or employment, you need to take that to your employers. But if you can clue her into the fact that gossip is not good for her, you may be doing the work of the angels.