Pope Francis to business students: If you worship money, you’ll become a slave 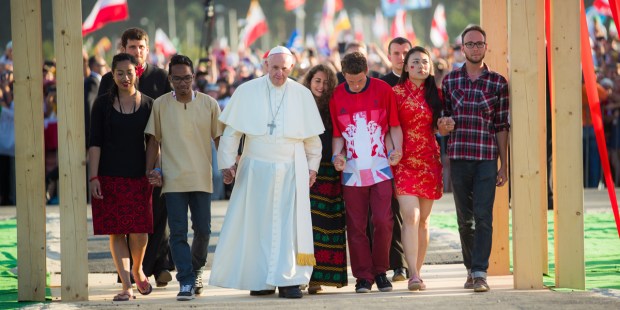 Says that despite the expectation to seek success at all costs, they should take time for fraternity.

“It is essential that from now on and in your future professional life you learn to be free from the ‘lure of money,’” Pope Francis told 80 Catholic students of the Institution des Chartreux de Lyon, France, on Thursday. The institute educates financial and economic leaders who are preparing to enter prestigious business schools. They are in Rome for a period of cultural experience.

The pope spoke to them about “the slavery into which money shuts those who worship it.”

He encouraged the group of future entrepreneurs to cultivate the “strength and courage not to blindly obey the invisible hand of the market.”

“I am glad to know that your academic formation includes a strong human, philosophical and spiritual dimension, and for this I thank God,” he said.

Consequently, he encouraged them to “draw benefits from your time studying to train yourselves to be promoters and defenders of a growth in equality, artisans of a just and fitting administration of our common home, namely the world.”

He urged them to leave their imprint on history and to decide their own future. In doing so, he said, they must “become responsible for this world and the life of every man.”

“Never forget,” he continued, “that ‘every injustice against a poor person is an open wound, and diminishes your very dignity.’”

Regardless of the world’s expectation that they seek success, he told them, they should give themselves “the means and the time to journey on the paths of fraternity, to build bridges between men rather than walls.”

He told the young people present that they were called to build a “more just and humane society.”

Contrary to individualism, according to which they would use their work and talent strictly for their own benefit, Pope Francis invited them to follow a different path.

He encouraged the students who are Christians “to remain always joined to Christ in prayer, to learn to entrust everything to God, and in this way you will not succumb to the temptation of discouragement or desperation.”

“Never forget, in his gaze on others and on yourselves, ‘man infinitely transcends man,'” said Pope Francis to those who are not Christians, quoting Blaise Pascal.

In conclusion, he encouraged them to “work for good, to become humbly the seed of a new world.”