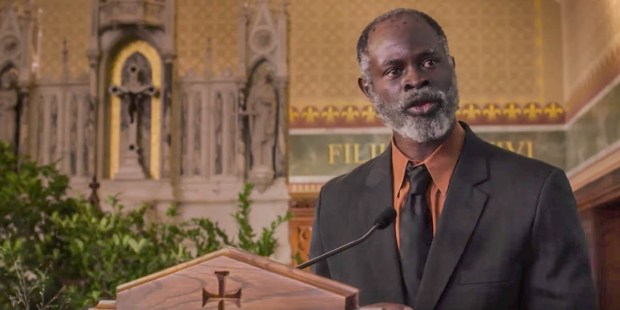 Despite the over-reaction of the internet, the film is not “culturally insensitive.” Based on real people, the characters are who they are.

It’s October, that time of the year when movie screens everywhere are filled with malevolent monsters, crazed killers, and assorted angry apparitions. That’s good news for anyone who might enjoy a good campfire tale or two, but not so much for those who find no fun in the macabre. Fortunately for the latter, Pure Flix has them covered. The studio behind such faith-based hits as Do You Believe? and Old Fashioned has of late made it something of an October tradition to provide a bit of counter programming to Hollywood’s annual horror-thon. This year’s offering is Same Kind of Different as Me.

Adapted from the best-selling memoir of the same name, Same Kind of Different as Me tells the story of well-to-do couple Deborah and Ron Hall (Renee Zellweger and Greg Kinnear) and their unexpected friendship with a homeless man named Denver Moore (Djimon Hounsou). The unlikely bond that grew between the trio would go on to positively affect many in their home town, including Ron’s alcoholic, emotionally abusive father Earl, played by Jon Voight.

Yes, you read those names correctly. With three Academy Award winners and one nominee in its cast, Same Kind of Different as Me is obviously heavier on star power than the typical Pure Flix production. That’s because the film was originally semi-funded by Paramount, which planned on releasing the movie earlier this year. Paramount backed out of the release, however, and Pure Flix quickly nabbed the film for their pre-Halloween slot.

There has been some speculation on the internet that Paramount got cold feet after early reaction to the film’s trailer was, to put it mildly, less than positive. The general perception, at least from the usual suspects on the internet, was that the movie was going to be a mishmash of racist tropes. Among those named were that of the saintly rich white couple coming to the rescue of a poor helpless black man, as well as the “magical negro” who appears to bestow enlightenment on the opposite race. One particularly disturbed writer at The Guardian went so far as to describe the trailer as “the most offensive thing I have ever seen.”

Now that the film is upon us, however, it appears the internet may have overreacted just a tad. (Hard to believe, I know.) To begin with, Ron Hall may be rich and white, but he’s no saint. The movie begins with him admitting to a carrying on a long-running affair behind his wife’s back. The pair ultimately decide to try and salvage their marriage, and as part of his penance, Ron agrees to help Deborah at the homeless shelter she regularly volunteers at. There they encounter the perpetually angry Denver and the baseball bat he continuously threatens to beat people with. Not exactly most people’s definition of a magical font of wisdom.

True to her Christian beliefs, Deborah reacts to Denver’s aggression with compassion rather than with fear, and urges Ron to do likewise. It’s not an easy path to friendship, though, as both men have prejudices to overcome. Denver grew up the son of a sharecropper in the rural south, and has little trust in white people as a result. Ron is a self-made art dealer and sees next to nothing to admire in unemployed, potentially violent individuals like Denver. At first, the only thing keeping the two men speaking to one another is Deborah’s stubborn faith. As time goes on, however, and Ron and Denver truly start to listen to one another, they begin to discover each other’s worth.

Doubtless, there is a whiff of “message movie” to Same Kind of Different as Me, which means it’s as fraught with potential schmaltz as any other Pure Flix production. A bastion of culturally insensitive stereotypes, however, it is not. Being based on real people in a true story, the characters are who they are. And the notion that people divided by race and/or social class can overcome those differences through a little faith and patience hardly seems like “the most offensive thing I have ever seen.” Same Kind of Different as Me is a nice, simple movie with some light, easily digestible preaching. If you’ve enjoyed other Pure Flix movies, you’ll probably like this one too. If not, don’t worry, Hollywood has plenty of blood and guts to fill up your movie schedule before All Saints Day rolls around.

Read more: Same Kind of Different as Me is a story of grace, love, and homelessness