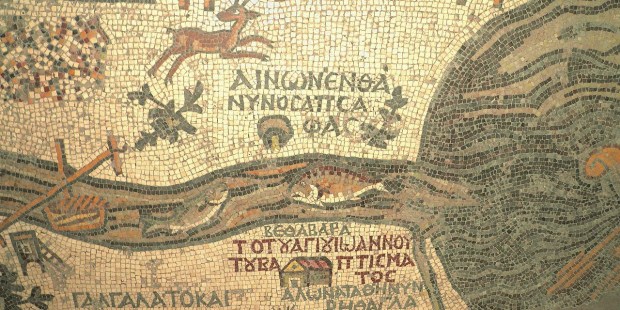 The “Madaba Map” is the oldest surviving original cartographic description of the Holy Land.

Driving through the King’s Highway a half an hour south of Amman, one finds Madaba, a relatively small city that is nowadays home to around 60,000 people. This city, which belonged to the Moabites, the Nabateans, the Romans, the Byzantine, the Rashidun and the Umayyad throughout history, is now home to the biggest Christian community in all of Jordan, proportionally speaking: both Catholics and Greek Orthodox make up around 10 percent of the total population of Madaba.

Archaeologists affirm Madaba has been inhabited since the Middle Bronze Age. In fact, it is mentioned twice in the Bible: once in Numbers 21:30, and once in Joshua 13:9. The city then stood in the very borders of the Moabite empire. But during Roman (and consequently, Byzantine) rule, it belonged to the broader Arabian Province, founded by Trajan to substitute the Nabatean Kingdom.

It was during those centuries, from the 2nd to the 7th, when the Christian community of the city established itself. In fact, one already finds “Medaba” mentioned as an Episcopal See in the acts of the Council of Chalcedonia, in the 5th century.

The Greek Orthodox church of St. George in Madaba, Jordan, is not only home to some of the most beautiful icons in the region. It’s also the place where the most intriguing (and revealing) map of the Holy Land is found: the so-called “Madaba Map,” an intricate floor mosaic dated in the 6th century, the oldest cartographic depiction of the Holy Land preserved to the day. It covers most of the region, from Lebanon to the Nile delta, from North to South, and from the Mediterranean Sea to the Eastern Desert, from West to East. In it, more than 150 towns, villages, cities and places of interest are featured, including some exceptionally intriguing symbols that, according to some archaeologists, represent pilgrimage places.

For instance, the map shows two fish facing each other. One of them seems to be swimming back from the Dead Sea, while the other swims towards it, in the Jordan River. But it is well known that fish cannot survive in the Dead Sea (it’s not called the “Dead Sea” out of sheer arbitrariness, after all). Therefore, most historians and archaeologists interpret this to symbolize a meeting point for Christians.

The spot marked on the map is Bethabara, now known as Bethany-beyond-the-Jordan, the place in which, according to tradition, Elijah and Elisha crossed the Jordan (Cf. 2 Kings, 2). Taking into account that the figure of John the Baptist is intimately related to that of Elijah (in the Gospel of Matthew Jesus testifies about John, saying “and if you are willing to accept it, he is the Elijah who was to come”), tradition holds this area is that in which John the Baptist started his mission. Consequently, Bethabara has also been considered to be the place where Jesus was baptized.

Interestingly, the map is not oriented northwards, like modern maps are. In fact, it faces east towards the altar of the church because of a very specific reason: the position of the places on the map itself coincides perfectly with the actual compass directions. It is only natural to think that pilgrims visiting this church would orient themselves using this map, knowing where they should head if they were visiting Jerusalem, Jericho, Mount Nebo, Gedara or Lake Tiberiades, just to mention some of the destinations depicted in it.

Originally, the map measured 21×7 meters, and was made with more than two million “tesserae” (that is, mosaic stones). But an earthquake destroyed Madaba almost entirely in the 8th century, and the city was abandoned until the 19th century. In the year 1884, when the new church of St. George was being built in the place in which the old basilica stood, the mosaic was just found again, and incorporated in the new building across from the church’s magnificent iconostasis.

You can learn more about the Madaba Map, and some other interesting destinations in the Holy Land, here. Make sure you see the video below to learn more about the map itself: it is a lecture given by the Jordanian archaeologist Mahmoud Twaissi at the very entrance of St. George’s Church: