4 Courtroom dramas that are just as inspirational as ‘Marshall’ 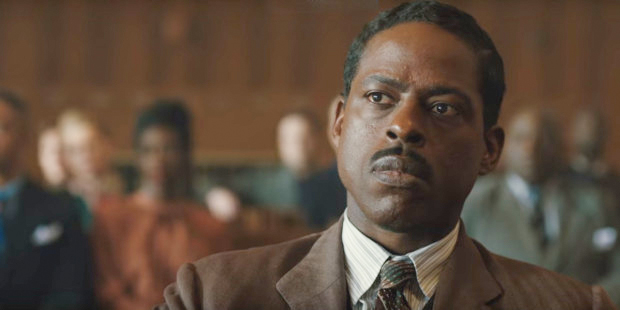 These films tell us that our system, as imperfect as it can be, does work..

Few people knew the Supreme Court more intimately than Thurgood Marshall. As a lawyer, he argued 32 cases before the esteemed body, winning a remarkable 29 of them. As a Supreme Court Justice himself, he served for more than 24 years — nominated by President Lyndon Johnson and retiring during the administration of George H.W. Bush. He was a lion of the civil rights movement, one who was already an elder statesman when Martin Luther King Jr. came into his own.

But the new film Marshall, in theaters now, shows us a much younger Thurgood — one who, in 1941, was canvassing the country as a lawyer for the National Association for the Advancement of Colored People. Though he spent most of his time in the deep, racially divided south, this particular case sends him north, to Connecticut. There he helps defend a chauffeur accused of raping his wealthy white employer. One twist, though: The judge, a good friend of the prosecuting attorney, rules that Marshall cannot speak in court. He can work on the chauffeur’s defense, but it’ll be up to Marshall’s inexperienced Connecticut attorney Sam Friedman — a man who’s never argued a criminal case in his life — to present the case and, perhaps, do the impossible: Convince an all-white jury in this wealthy, class-conscious conclave to believe a black man with a problematic past.

The PG-13-rated Marshall, despite some pretty harsh language and some obvious sexual content, embodies why I’m a sucker for courtroom dramas: Nowhere do we see guilt and innocence, wrong and right played out in such a clear, stirring manner. Many of these dramas tell us that our system, as imperfect as it can be, works. And that’s a pretty great message in these cynical times. So with that in mind, here are the inspirational courtroom dramas I think are the best of the best.

You barely see the inside of a courtroom in this Henry Fonda drama. Most of the “action,” such as it is, takes place in the jury room, where a dozen hot, impatient jurors debate the guilt or innocence of an alleged killer. Most know the boy should be locked away or executed. Eleven cast their votes for guilty. Just one suggests otherwise — and even he’s not so sure. “I just want to talk,” Juror No. 8 (Fonda) says. “What’s there to talk about?” another juror asks. “Eleven of us think he’s guilty. No one had to think about it twice except you.” But by the time the deliberation is through, all will think twice … about a lot of things. Boasting a 100-percent “freshness” rating on Rotten Tomatoes, 12 Angry Men isn’t just one of the best courtroom dramas ever: It’s one of America’s best movies. It illustrates both the beauty and the pitfalls of the American judicial system, and it was even used in Argentina as a way to educate the country when it switched to a trial-by-jury system. Never has watching 12 guys arguing a black-and-white case on a black-and-white screen been so compelling. (You can stream the movie on YouTube, Amazon and Google Play for $2.99, or on iTunes for $3.99.)

We move from the criminal courtroom to a post-World War II military tribunal, where four German judges and attorneys stand accused of aiding and abetting Nazi atrocities — often through passive compliance or willful negligence. The defendants’ charismatic attorney Hans Rolfe (Maximillian Schell) argues that his clients, like a great many other Germans, were simply trying to go along to get along. Moreover, they were hardly alone in their complicity: He suggests that America, too, turned a blind eye to Nazi atrocities. When guilt can be shared by all, why call these upstanding Germans out? It’s up to a panel of three judges led by American Dan Haywood (Spencer Tracy) to unspool right from wrong in this tangled, ticklish case. In addition to the legendary Tracy, this star-spangled drama features performances from such Hollywood luminaries as Burt Lancaster, Marlene Dietrich, Montgomery Clift, Judy Garland and even William Shatner. But it was Schell who stole the show, winning an Oscar for his performance — one of 11 the film was nominated for. Moreover, the film is a great illustration of how difficult it can seem to determine what’s right and wrong … until you clear your head and discover that, actually, it’s not so difficult at all. (Judgment at Nuremberg is available for streaming with a subscription to Amazon Prime.)

Another “courtroom” drama in which the actual courtroom is rarely seen, Loving chronicles the events surrounding the 1967 case of Loving v. Virginia, in which interracial couple Mildred and Richard Loving fight for their right to have their marriage recognized. The case was a landmark decision for American civil rights, but sublime performances by Ruth Negga as the quiet, determined Mildred Loving and Joel Edgerton as her frustrated, devoted husband give this film its real pop. Negga was nominated for an Oscar for her work here: Personally, I think she should’ve won. (You can watch Loving for free if you’re a subscriber to HBO Go.)

Yes, we’ve mentioned this one before. But no list of courtroom dramas would be complete without a word or two about this all-time classic film (based on Harper Lee’s exquisite novel). Like Marshall, this case revolves around accusations that a black man sexually assaulted a white woman. Unlike Marshall, this trial takes place in the Deep South, making a fair trial even more difficult to come by. But that doesn’t stop attorney Atticus Finch from doing his best to defend Tom Robinson — even when his life and the lives of his family are threatened. In some respects, To Kill a Mockingbird is a sobering reminder that (spoiler warning) justice doesn’t always prevail in the courtroom. But it reminds us that noble causes are worth fighting for, even when they’re losing causes, too. And in Gregory Peck’s Oscar-winning turn as Atticus Finch, the film gives us one of cinema’s greatest all-time do-gooders — one who doesn’t need to pack a gun or wear a cape to be a real hero. (You can stream To Kill a Mockingbird on Netflix.) Four dramas, four clear verdicts of inspirational excellence. The defense rests, your honor.