Nathaniel Hawthorne’s daughter is on the road to sainthood 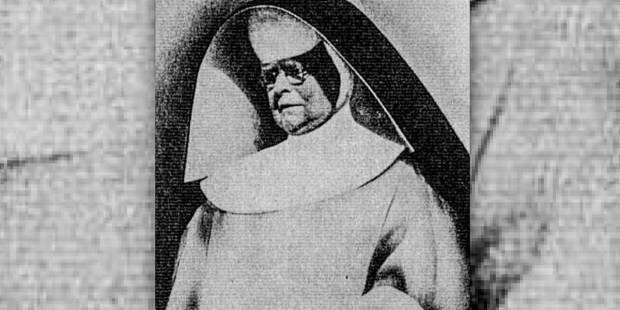 Servant of God Rose Hawthorne abandoned her literary career to work for the poor.

Born in Lenox, Massachusetts, in 1851, Rose Hawthorne grew up in the family of American literary legend Nathaniel Hawthorne, who one year before her birth published The Scarlet Letter.

The famous author wrote about Rose’s birth in a letter to a friend, writing, “Mrs. Hawthorne published a little work, two months ago, which still lies in sheets; but, I assure you, it makes some noise in the world, both by day and night. In plain English, we have another little red-headed daughter—a very bright, strong, and healthy imp, but, at present, with no pretentions to beauty.”

The Hawthrone family traveled throughout Europe in Rose’s early childhood after Nathaniel was appointed American Consul to England. This experience exposed her to the Catholic Church in a positive way. Rose later wrote about the experience of seeing Pope Pius IX, “I became eloquent about the Pope, and was rewarded by a gift from my mother of a little medallion of him and a gold scudo with an excellent likeness thereon, both always tenderly reverenced by me.”  The family returned to Massachusetts in 1860.

Nathaniel died due to poor health four years later in 1864 at the age of 59. Facing the increased costs of education, the Hawthorne family moved to Germany and Rose continued her education there. There she met George Parsons Lathrop, whom she married in 1871 in an Anglican church in England.

Rose gave birth to a son, Francis, who died at the age of 5 due to diphtheria. Both Rose and George immersed themselves in their literary careers and eventually built a home in New London, Connecticut.

After a series of events and encounters both Rose and George were received into the Catholic Church through the instruction of Father Alfred Young, C.S.P. at Saint Paul the Apostle Church, New York City. Father Young was a disciple of Father Isaac Hecker and introduced the couple to quality Catholic literature that helped them understand the beauties of the Catholic faith.

Both embraced their newfound religion, but at the same time their marriage fell apart. George had a drinking problem that made it impossible for Rose to live with him. She asked her confessor for advice and was granted the ability to live permanently separated from George. Rose then dedicated her life to charitable works enrolling herself in a nurse’s course at the New York Cancer Hospital.

This ignited in her a deep compassion for those suffering from incurable cancer and she spent all of her time helping those in need. After her husband died in 1898 she met a Dominican priest, Father Clement Thuente, who guided her in her charitable endeavors.

With the help of some wealthy donors Rose established the St. Rose’s Free Home for Incurable Cancer, dedicated to St. Rose of Lima. She also established a new community of Dominican sisters now known as the Dominican Sisters of Hawthorne, Congregation of Saint Rose of Lima.

According to Catholic New York, at the Free Home for Incurable Cancer “No payment was requested from her patients or their families. She depended on the providential care of God. She begged for nearly everything she needed. She believed that to help the poor she must live as they did.”

Rose wrote about the inconsistency of those serving the poor while themselves living luxurious lives. “What shall we say of cold and scant meals for the very sick, while their care-takers are so well fed that their larders are a matter of delicate non-supervision?”

In her new religious congregation Rose became known as Mother Mary Alphonsa and worked for 30 years among the poor of New York City. She died in 1926 and her dedication to the suffering was an inspiration to many.

Her cause for canonization was officially opened in 2003 and the positio document summarizing her life and virtues was sent to Rome for review in 2013.