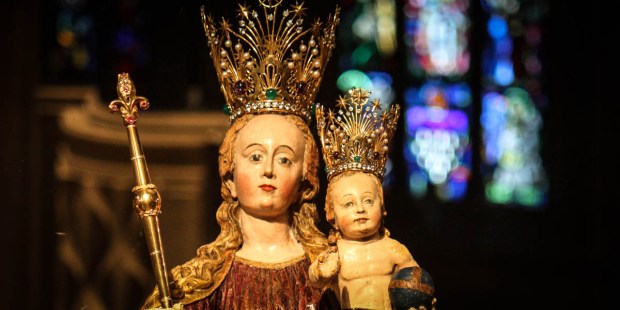 Our Lady of Consolation offered her sash to St. Monica, and it’s now part of a religious habit.

Most of us know, at least vaguely, the story of St. Augustine. The North African saint was born in the 4th century to a pagan landowner and a Christian woman named Monica. Augustine would become a bishop, a Doctor of the Church, and a saint — and for this, he credited his mother’s prayers.

However, many of us might not know of the influence of the Blessed Virgin in his transformation.

Because of the conversion of St. Augustine, Our Lady received one of the many titles with which she is venerated: Our Lady of Consolation.

St. Monica is honored for her unyielding Christian virtues, which helped her to deal with the pain and suffering brought on by her husband’s chronic acts of adultery and her own son’s immoral ways. It is said she cried herself to sleep virtually every night. But she did not despair. Rather, she turned her heartache over to the Blessed Virgin, asking for her help. And help she received. Our Lady appeared to Monica and gave her the sash she was wearing. The Virgin assured Monica that whoever was graced by the sash would receive her special consolation and protection. The sash was given to her son and ultimately became part of the Augustinian habit.

On May 24, 1875, a statue of Our Lady of Consolation, having been procured by Fr. Joseph from the Cathedral of Luxembourg, was carried from St. Nicholas Church to the new church in Carey. News reports tell of the tremendous rains that fell that day, but during the seven-mile procession, not a drop fell on the statue or the people bringing the statue to its new home. Upon arriving in the new church the rain fell once again, everywhere.

Today devotion to Our Lady of Consolation is of great importance in such places as Luxembourg, England, France, Japan, Manila, Turin, Malta, Australia, Venezuela and others. Pope St. John Paul II visited the shrine in Germany.

Feast Days for Our Lady of Consolation are varied. The Augustinians celebrate the feast on September 4; the Benedictines on July 7. In the USA it is usually celebrated on October 22 or the last Sunday in October.

Our Lady of Consolation, please pray for us all.