A classical music playlist for Halloween 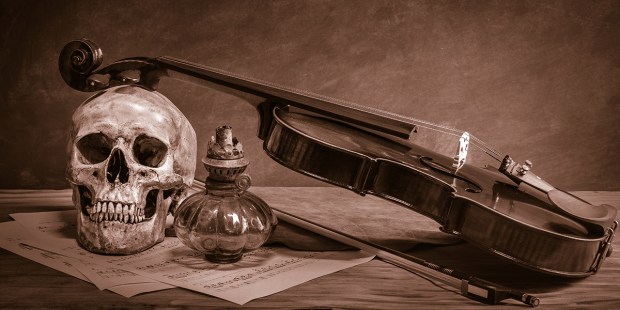 Spooky and dramatic music to help you get in the mood.

Halloween is a holiday with a mixed reputation among Catholics, and Christians in general, and if you’re wary of it, Simcha Fisher’s article may help calm your concerns — or Fr. Augustine Thompson’s article, for that matter, or others written on the topic. (I’ll wait here while you read of some them, if Halloween — not the nastier side of it in today’s culture, but the basic idea of the holiday, which is rooted in Christianity — still makes you uncomfortable.)

Okay, so now that we’re all ready to enjoy some healthy Halloween fun, let’s talk about classical music. Although it’s not the most popular form of music today, it’s more accessible than many people realize, and is abundantly present in popular culture, particularly in soundtracks for movies and TV shows and commercials. (Particularly, those of us who grew up in the age of Looney Tunes and Fantasia know more classical music than we may realize.) There are many pieces that we might not know by name, but which we recognize almost instantly when we hear them. It’s fun to revisit them from time to time on their own.

Since I’m the kind of person who makes playlists for autumn, for Christmas, for rainy weather, for grocery shopping, for getting ready to sleep, etc., I decided to put together a playlist of classical music that I thought fit well with Halloween: works that could be considered spooky, dark, and/or directly or indirectly related to Halloween themes. I called upon some musician friends to help me round it out, but I tried to stick with pieces that are not too dissonant or difficult; as one of my friends put it, this list is more about “Disney Halloween” than Friday the 13th. It’s something to listen to while you trim the house with Halloween decorations, or prepare your kids’ costumes — or your own — or maybe during a family-friendly Halloween party.

Most of these works will likely sound familiar, either because they have been used directly in pop culture, or because they have been more or less imitated by later composers; I dare you to listen to “Mars” by Holst, or “The Sorcerer’s Apprentice” by Dukas, and tell me that John Williams didn’t steal a few parts for Star Wars, or that Hans Zimmer didn’t lift parts for Gladiator.

Just as classical music is copied (explicitly or not) by modern composers, classical composers also used older music. For example, fans of Gregorian chant should keep an ear open for use of musical and textual themes from the medieval Gregorian sequence “Dies irae” (“Day of Wrath”), long used at funeral masses. It describes the end of the world and Judgment Day, ending with a supplication for mercy for oneself and for the deceased. Besides the two works on this list that are settings of that ancient text, there are two other pieces that incorporate the main melody of the chant into their music.

So without further introduction, here’s the list, with links to the selections on YouTube. (If you want to check out the entire list out on my personal You Tube channel, you’re welcome to do so.)

Read more:
Classical music for dummies (yes, you, sorry) in an online course

Read more:
The Petrucci Music Library offers all the classical music you could ever want … for free!