The spiritual meaning behind creepy crawlies 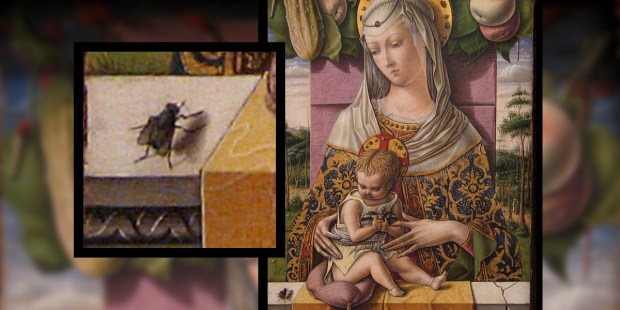 Christian artists over the centuries have frequently used insects in their paintings. Here’s why.

The spiritual symbolism of nature, while most often expressed in popular animals such as the lamb, lion, and d0ve, can also be found in the little creatures that sometimes irritate us.

Christian artists over the centuries frequently used the following insects in their religious paintings to highlight various spiritual truths.

Not surprisingly, a fly is a symbol of evil, sin, and death. It was seen as a bearer of disease, bringing decay into the body and soul.

Another symbol of evil, the wasp’s reputation for stinging people made it a perfect representation of Satan and his many minions that sting a person’s soul.

A beautiful insect that many enjoy looking upon, the ladybug was a positive symbol that originally bore the name of “Our Lady’s Bug.” It represented restoration and healing.

Read more:
5 Commonplace sights to remind you of Our Lady

The most widely used insect in Christian art, the butterfly’s miraculous transformation from a caterpillar to a butterfly has repeatedly been used as a symbol of the resurrection. It is also seen as a symbol of hope, beauty, and new life.

The maggot was used in art to represent corruption of the soul, mortality and evil. Its grotesque appearance and feasting on dead corpses made it a perfect symbol of spiritual decay.

Read more:
Do spiders deserve their reputation as sinister creatures?