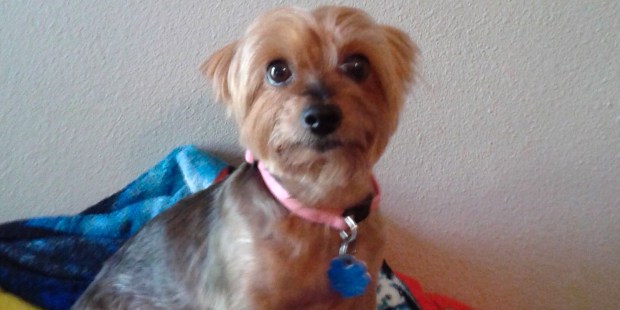 For many people, the loss of a beloved family pet can be one of the most difficult experiences to live through. For Joanie Simpson, it seems, she almost didn’t live through the experience.

The symptoms were real, but when a cardiologist inserted a thin tube into a blood vessel in the 61-year-old’s groin and up to her heart, he found no arterial blockage.

There was indeed a lot going on in Simpson’s life in the weeks preceding the medical event: her son was facing back surgery. Her son-in-law had lost his job. A property sale was proving to be complicated and lengthy. But what seems to have broken the camel’s back for her was the death of her Yorkshire terrier, Meha.

“I was close to inconsolable,” she told the Washington Post. “I really took it really, really hard.”

Her experience is described this week in the New England Journal of Medicine. But the Post article focuses more on the dog, 9-year-old Meha, who was suffering from congestive heart failure:

The dog was like a daughter, Simpson said. She adored jumping into the swimming pool, and when Simpson and her husband grilled on Friday nights, Meha was given her own hamburger.

“The kids were grown and out of the house, so she was our little girl,” said Simpson, a 62-year-old retiree who previously worked in medical transcription.

But Meha started having more bad days. By May of last year, she was ill enough that Simpson made an appointment to have her euthanized. When the day came, the dog seemed fine, and Simpson canceled the appointment. Meha died the next day, and not peacefully.

“It was such a horrendous thing to have to witness,” recalled Simpson. “When you’re already kind of upset about other things, it’s like a brick on a scale. I mean, everything just weighs on you.”

While in hospital, Simpson was stabilized with medication, and her doctors talked to her about the stress in her life. The syndrome they described “made complete sense,” she said. She was sent home after two days, and though she still takes two heart medications, she is doing fine, according to the Post.

She also admitted to be the kind of person who takes “things more to heart than a lot of people,” so if she gets another dog, as she wants to, she may experience the same broken heart some day.

But, as the old saying goes, she believes it is better than not to have loved at all. “It is heartbreaking. It is traumatic,” Simpson said. “But you know what? [Dogs] give so much love and companionship that I’ll do it again. I will continue to have pets. That’s not going to stop me.”