Chef José Andrés is now serving over 100,000 meals a day in Puerto Rico 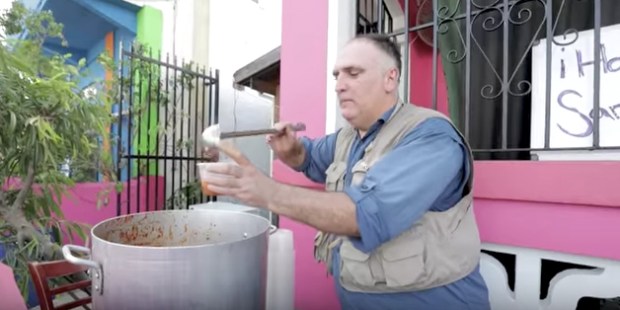 Doing what he does best for those who need it most

Last month we reported here that celebrity chef and restaurant owner José Andrés was on the ground in Puerto Rico, helping serve what seemed to be an astounding 10,000 meals a day to those afflicted by Hurricane Maria.

Incredibly, less than a month later, he and his fellow volunteer chefs, working with the non-profit World Central Kitchen, have gone above and beyond their original goal: they are now serving over 100,000 meals a day in the parts of the island hardest hit by the disaster.

Since he arrived in Puerto Rico, days after the hurricane struck, Andrés has used the hashtag #ChefsForPuertoRico on Twitter to help mobilize volunteers and set up food trucks and kitchens where there is the most need for them. The website Eater reports that Andrés has set up kitchens in the towns of Aguadilla, Ponce, Farjado and San Juan, has delivered food door-to-door, sent out food trucks, and established paella pop-ups.

Yesterday #ChefsForPuertoRico sent a pop-up paella team to Humacao to serve 5,000 hot meals!! We are doing these all around the island! 🥘 pic.twitter.com/n13rw8l3QX

The Washington, D.C.-based chef has helped organize a volunteer-staffed organization that brought sandwiches, paella, spit-roasted chicken, and Puerto Rican beef stew to hundreds of thousands who are still without electricity and basic essentials. Throughout the relief effort, he has used Twitter as a tool to recruit volunteers, assemble materials, and let hungry Puerto Ricans know where to go for a meal.

We made over 36,000 sandwiches by hand at El Choliseo in just one day– delivered to Puerto Ricans in need.NEED VOLUNTEERS TO CONTINUE!!🇵🇷🙏🏾 pic.twitter.com/PkiFfdP4ti

As more and more are served and the situation improves, Andrés has shifted his resources to those areas still in need.

Here he gives a shout out to the National Guard and Homeland Security, who have assisted in the delivery of relief in the hardest to reach hurricane-ravaged areas.

Quick report from #PuertoRico: Today we brought spit-roasted chicken to 1,000 in isolated San Lorenzo with help of @NationalGuard @DHSgov 🤝 pic.twitter.com/mjLAR5DDAM