How the last “witch” hanged in Boston was a Catholic 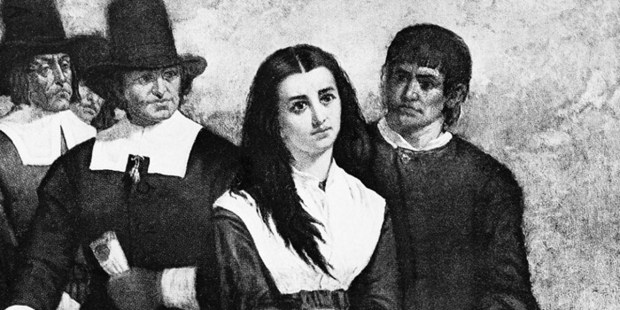 While most of those hanged during the outbreak of hysteria over “witches” among settlers in 17th-century Massachusetts were themselves Puritans, Ann “Goody” Glover was a Roman Catholic immigrant from Ireland.

The trouble began for Glover (the title “Goody” is short for Goodwife, the equivalent of Mrs. at the time) some time after 1680, when the widowed washerwoman took a job working for the Goodwin family in Boston. According to an account in the Irish Times, Glover and her daughter, Mary, were dismissed from their jobs after Mary was accused of stealing clothes from the Goodwin family.

Some time after the Glovers had left, in the summer of 1688, four of the Goodwin children came down with inexplicable symptoms, and a physician was brought in to examine them.

The children’s cries were “piteous and shrill, and the shifting of the pain from one [body] part to another was constant and inexplicable,” according to James Bernard Cullen’s 1889 work The Story of the Irish in Boston.

At a time when anti-Catholic bigotry was the norm and hysteria over witchcraft was rampant, witchcraft was blamed, and the Glovers were named as the witches responsible for the children’s’ afflictions.

The Reverend Cotton Mather himself, Boston’s leading Puritan minister of the time, called Goody Glover an “idolatrous Roman Catholick” during his investigation into the case. After interrogating her, Mather reported that Glover prayed to a host of spirits, evidence that was used against her in her trial. Today, it is thought that these spirits were not demons, but Catholic saints.

When ordered to recite the Lord’s Prayer at her trial, Glover, who many historians believe did not know much English, did so in a mix of Gaelic and broken Latin, confirming her guilt in the minds of her accusers.

Glover was hanged in Boston on November 16, 1688. In the words of Robert Calef, a Boston merchant who knew her, “Goody Glover was a despised, crazy, poor old woman, an Irish Catholic who was tried for afflicting the Goodwin children. Her behavior at her trial was like that of one distracted. They did her cruel. The proof against her was wholly deficient. The jury brought her guilty. She was hung. She died a Catholic.”

Four years after her execution, the witchcraft hysteria peaked in Salem, and 19 “witches” were sent to the gallows.

Three hundred years after Glover was hanged, in 1988, the Boston City Council proclaimed November 16 as “Goody Glover Day” in remembrance of her. A plaque dedicated to the memory of “Goodwife Ann Glover” reads:

Not far from here on 16 November 1688 Goodwife Ann Glover an elderly Irish widow, was hanged as a witch because she had refused to renounce her Catholic faith. Having been deported from her native Ireland to the Barbados with her husband, who died there because of his own loyalty to the Catholic faith, she came to Boston where she was living for at least six years before she was unjustly condemned to death. This memorial is erected to commemorate “Goody” Glover as the first Catholic martyr in Massachusetts.