How the Vatican works at the UN 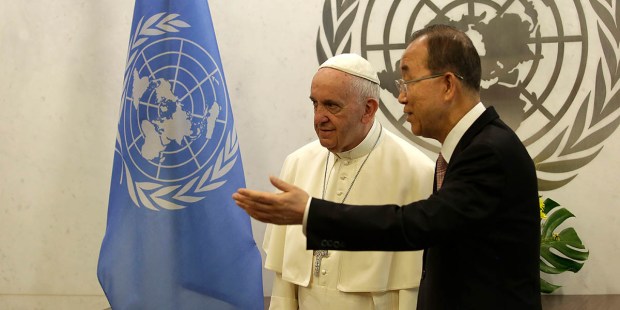 Pope Francis takks with United Nations Secretary Ban Ki-moon(R) at the United Nations in New York September 25, 2015 in New York. Pope Francis arrived yesterday in New York on the second leg of his US tour, where he will address the UN General Assembly, visit the 9/11 Memorial, host a prayer service with worshipers at Madison Square Garden and then continue on to Philadelphia, Pennsylvania. AFP PHOTO/POOL/JOSHUA LOTT / AFP PHOTO / POOL / Joshua LOTT
Share
Print
Aleteia - published on 10/24/17

Since 1964, the Holy See has had permanent observer status.

Today is the anniversary of the official creation of the United Nations, and thus UN Day. The Vatican has its own role in collaborating with the United Nations, even if in many areas the Church finds itself at odds with certain policies promoted by the international grouping of nations.

The Holy See has had permanent observer status at the UN since 1964, and is active with four missions: in New York, Geneva, Vienna, and Paris.

October 24 marks the anniversary of the entry into force in 1945 of the United Nations Charter, and the ratification of this founding document by the majority of its signatories, including the five permanent members of the Security Council.

Pope Francis has addressed the UN General Assembly in the United States and staff members at the UN Office in Nairobi.

His tweet today reads “Let us all work together to promote peace among peoples and guarantee respect for human rights.”

Archbishop Ivan Jurkovič is the Holy See’s Permanent Observer to the United Nations in Geneva. After a private audience with Pope Francis this week he spoke to Vatican Radio about his meeting with the pope.

“[Francis’] first words were: ‘You are in the forefront of Church action,’” the archbishop said.

Archbishop Jurkovič said that at the heart of the pope’s concerns are the armament issue and all that regards migration.

He spoke of the role of the UN in today’s world and of how the organization acts as a catalyst and “a global point of reference” where leaders on the world can find common space and room for debate.

Archbishop Jurkovič also spoke of the increased consideration enjoyed by the Catholic Church in the international environment provided by the UN and about the particular sensitivity of Pope Francis for issues that are at the heart of the UN’s mandate.

“Why this? A little is due to Pope Francis’ style, to his direct involvement in almost all the issues that are concerned with the pain of humanity,” he said, adding that international organizations clearly perceive this.