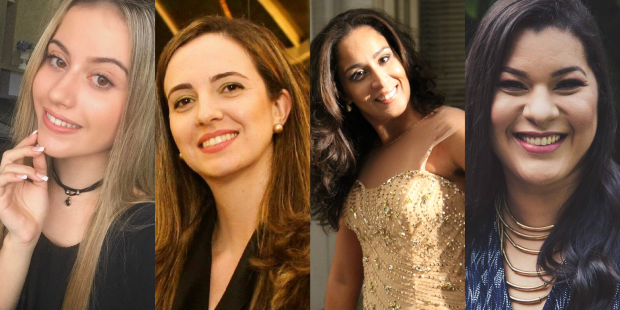 Released just in time for October, the Month of Mary

For Catholics, the month of October has long been dedicated to the Holy Rosary, a powerful devotional and a tool for contemplative prayer, which was presented to St. Dominic by Mary in 1206. This year, however, there are four Catholic Brazilian musical artists who have taken the celebration to a whole new level. They have each released a song about the Rosary, all within a few weeks!

Camila Holanda was born in João Pessoa, Brazil, in 1999. She inherited a devotion to Our Lady from her grandmother and matured surrounded by an environment rich in faith. She began taking vocal lessons at the age of 13 and she took to it naturally, deciding to pursue a career in music. She released her first full length album, Te imitarei (I will imitate you), in 2017 with Sony Music.

Marcela Siesler has been singing Catholic music since she was 9 years-old, with the choir of the Vincentian Sisters in the parish of Our Lady of Divine Love in Corrêas. She has a teaching degree and specialized in the Sciences of Religion at São Bento College. Now she is a singer, musical educator, and religious educator. She has conducted a choir of adolescents for the last 4 years at the Colégio Santo Inácio in Rio de Janeiro.

Marcela released her first album in 2015, which was met with critical acclaim. She is the cantor at her local parish and sings once a month at the Cathedral of St. Peter of Alcantara in Petropolis; these concerts are broadcast on TV.

Jacquelinne “Jake” Trevisan has known she wanted to be a singer since she sang in front of the graduating class of her school when she was 14 years-old. Raised to a strong Catholic faith, she viewed her love of music as a vocation and has used her gift to evangelize.

She released her first solo CD, JAKE: Warrior of Love, which became popular in Brazil. She describes herself as a “missionary of the Catholic Church” who “travels to distant lands to witness Love. Coated with the armor of the Christian, I fight battles for the salvation of the righteous, and use the effective tool that is Catholic Music.”

Aline Venturi has been on a mission to “bring to the public a beautiful message of full trust in God and His Love” for 20 years. Catholic artist and mother of two, Aline has released 3 independent albums: My Steps (2003), Well Near (2006), and Flourished (2013). All of her albums have met with critical success and put her among the great Catholic singers and composers of Brazil.