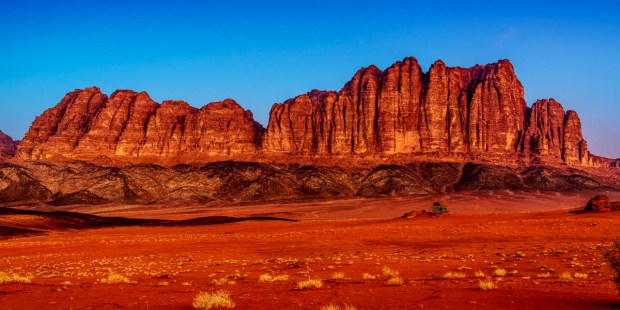 Last year Rogue One: A Star Wars Story entertained audiences with its engaging narrative and beautiful vistas. What may be surprising to some is that a key landscape of the movie (known as the moon-planet of Jedha) was not a product of computer animation. It is a real location, mentioned in the Bible, which was also home to Christian monks and hermits in late antiquity and the early Middle Ages. In fact, the tradition of the Egyptian Desert Fathers extended all the way to this region.

When preparing for Rogue One, director Gareth Edwards envisioned the planet Jedha as a religious pilgrimage site of the Star Wars universe. Edwards said to reporters, “If A New Hope is kind of like the story of Jesus, there must be a whole religion beyond that … We felt like, for 1,000 generations, the Jedi were these leaders of the spiritual belief system. [Jedha] has got to be like a Mecca or a Jerusalem, but in the Star Wars world.”

An entire spiritual backstory was then made for the planet Jedha: within the Star Wars universe, this is the place where Jedi Knights would go to make their lightsabers, which centers on a temple for believers in the “Church of the Force”: an ancient religion surrounding the mysterious energy that binds the Star Wars universe.

What makes this interesting is how Edwards chose the Wadi Rum (Arabic for “Valley of the Romans”) in Jordan for the physical backdrop of his fictional Jedi planet. The place is certainly “otherworldly” and has frequently been used for movies set on the planet Mars. Yet, more importantly, it also has a spiritual dimension to it with a rich history of its own.

Biblically speaking, some scholars believe the Wadi Rum is referred to as Aram or Iram in the book of Genesis, and might also be the land of Uz mentioned in the book of Job.

Other scholars see it as a central part of the land of Midian, where Moses fled after killing an Egyptian (see Exodus 2:11). Whatever the case may be, the Wadi Rum had a significant historical connection to various biblical events and later on became a hub of Christian monasticism.

Before the days of the Rashidun Caliphate (the first of the four major caliphates established after the death of Muhammad), the Wadi Rum desert belonged first to the Nabatean kingdom, then to the Roman empire and, finally, to the Byzantines. It was during this last period when, apparently, it got its current name: the inhabitants of the desert — mainly Bedouin tribes who either worshiped Roman gods or had become Christians — would refer to the Christian monastic and ascetic communities established in the region as “Rum,” that is, “Romans,” a word that would apply to Eastern Romans (that is, Byzantines) and Greek alike.

Currently, there is no monastic life in Jordan whatsoever, either Catholic or Orthodox, although there is indeed a Christian presence all throughout the country, which keeps a 2,000-year-old tradition very much alive. But even if monks have not lived in either the desert or the surrounding hillsides for centuries, one can still see, visit and even enter and rest in the caves where they once lived, as they are nowadays mostly being used by shepherds while their herds graze in the surroundings.

While Star Wars director Gareth Edwards didn’t choose the Wadi Rum for its spiritual underpinnings, the remarkable history of the region provides an added authenticity to the fictional planet of Jedha, making the Wadi Rum a place of pilgrimage and solitude for Jedi Knights and Christian monks alike.

Read more:
Star Wars and the Isle Named for St. Michael the Archangel

Read more:
The Christian message within Rogue One: A Star Wars Story