When a child is mercilessly bullied at a fast food restaurant, the unexpected happens (VIDEO) 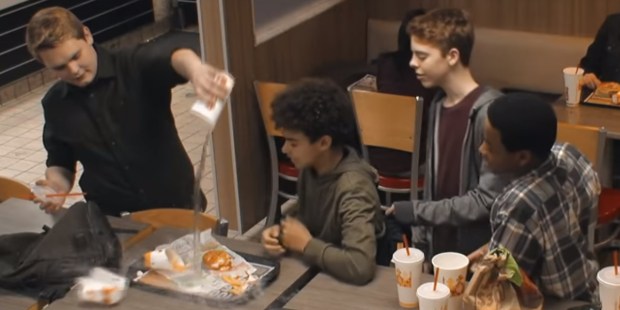 Incident in fast-food restaurant exposes why it’s so hard to stand up to bullies.

You’re sitting in a busy fast-food restaurant enjoying your burger with extra bacon, a side of fries, and a shake (you did hit Zumba this morning, after all), when you see some punky high schooler start bullying another child around the same age, who is sitting alone trying to eat his meal in peace. The logical next step is a no-brainer, right? The right thing for you or any other adult to do would be to walk over to the jerk and tell him to leave the poor kid alone. Or at the very least, get up from the table and tell the manager to deal with the situation.

But that’s far from what actually happened recently at a Burger King restaurant.

“Do you have any friends?” the bully taunts the innocent diner, poking and annoying his victim. “What are you even doing here?” he says, laughing with his own friends — very loudly to make sure he gets the attention of the dozens of other people also dining at the scene of this little hidden-camera experiment.

Yes, the bully and bullied were just actors, putting on a show to test how many people would actually stand up and step in — so no one was actually bullied in real life. But what was very real — and alarming — was how few people, despite their obvious looks of concern, actually moved a muscle to intervene. Some just watched slightly interested, while others looked around to see if someone else was going to jump up and stop the assault. But for the most part, people seemed “afraid” to do anything. In fact, they were more apt to get up to complain about the state of their food (which was “bullied” in the kitchen and delivered to them all beat up, also part of this experiment) than to help the boy in danger.

Outrageous? Despicable? The video would like you to think so. According to the production, now going viral, 95 percent of people who received the “bullied” Whopper Jrs. complained to the manager, but just 12 percent of customers stood up to stop the “bullied” kid, including one very cool lady who even picked up her own meal to go and eat with the victim.

About 30 percent of kids are bullied, and it’s a serious problem. But the production doesn’t paint the confused onlookers completely fairly. What’s going on here isn’t necessarily a bunch of people lacking compassion, but a common psychological phenomenon called a diffusion of responsibility. It’s also referred to as “the bystander effect,” when people in an emergency basically freeze up, partly because when in a large crowd, they assume others are going to take the lead. The danger is happening so fast, the brain can’t process the necessary (or logical) steps of action.

Not that any of this lets those do-nothing customers off the hook entirely. More of them needed to have done or said something! But stepping up is hard, for anyone. It takes courage to risk making a mistake in judgement or misreading a situation that is rapidly unfolding. Which is why this video is an eye-opening lesson for every one of us, one that starts with taking bullying more seriously, while also paying attention to the bystanders’ (our) reactions, followed by asking yourself: What would I have done in this situation? And then, praying that the next time you see a person in need, you trust your intuition and receive the grace to embrace responsibility, not diffuse it.

Watch the video — but make sure the kids are out of the room because of a few bleeped-out F bombs.