Is Latin America still the continent of hope, pope asks 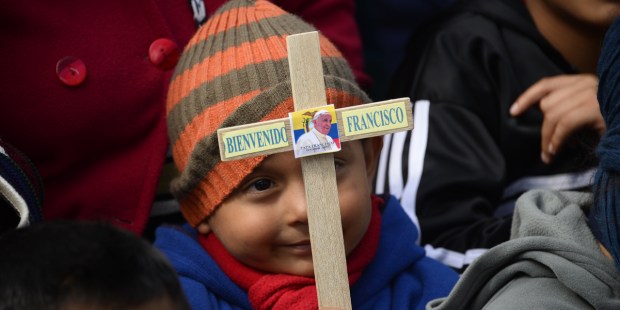 AFP PHOTO/JUAN CEVALLOS
QUITO,ECUADOR:Faithful wait for Pope Francis at the Marian National Shrine of "El Quinche" in the outskirts of Quito on July 8, 2015. Pope Francis, the first Latin American pontiff, heads Wednesday to Bolivia on the second leg of a three-nation tour of the continent's poorest countries, where he has been acclaimed by huge crowds. Francis will arrive in the Andean state from Ecuador, where he will wrap up his stay with a visit to a sanctuary of the Virgin of El Quinche outside the capital Quito. AFP PHOTO/JUAN CEVALLOS
Share
Print
I.Media for Aleteia - published on 10/26/17

“Have we begun once again to trust in ideologies that have resulted in economic failures and human devastation?”

Francis provided the preface to the new edition of a book on Latin America, announced the L’Osservatore Romano this week. The Argentinean pontiff poses questions regarding the future of the South American continent, “his” continent.

Written by Guzmán Carriquiry, vice president of the Pontifical Commission for Latin America and a close friend of the pope, the book discusses the bicentenary of Latin America’s independence.

The preface to the first edition was also written by the then-future pope, Cardinal Jorge Mario Bergoglio, in 2011; the preface to this new edition is signed by Pope Francis.

The Successor of Peter states that there is a need to return regularly to the roots of Latin American identity, so as to avoid being “orphans” with respect to their homeland. It is an identity, he emphasizes, made of “love and suffering, death and hope.”

Among the founding events of the “great Latin American homeland,” the pope notes the “patriotic feat” of emancipation (1809-1811), but also the apparitions of Our Lady of Guadalupe, the epic undertaking of missionaries to evangelize the New World, and a mixing of European and Native American peoples marked by deep wounds.

Nowadays, the Bishop of Rome continues, Latin America is at a crossroads. After a period of strong economic growth, the American sub-continent seems to live between “fear and uncertainty,” with weakened political structures and a new increase in poverty and social exclusion. Is it still the “continent of hope,” he asks?

“Have we perhaps resigned ourselves to a form of short-term pragmatism, in the midst of the confusion? … Have we begun once again to trust in ideologies that have resulted in economic failures and human devastation?”

What is needed is what he calls “creativity of prophecy,” especiallly required of the pastors of the Church.

During his apostolic journeys, Francis says he has been able to observe “the energies of faith and wisdom, of dignity and solidarity, of joy and hope” that spring from the heart of “our people.” This explains why, he says, “I am interested in meeting periodically with popular movements, which are the spokesman of the sacrosanct motto of ‘a roof, a land and a job’ for all.” All of these are experiences which, he writes, show the desire of the “true homeland,” which is the fatherhood of God.

In his previous preface six years ago, called “Homeland as fatherhood and sonship”—reprinted in L’Osservatore Romano next to the new preface—Cardinal Bergoglio harshly criticized “hedonistic atheism,” as the dominant cultural paradigm. This is a new “opium of the people,” he said at the time, a “single kind of thought” based on the use of reason divorced from a knowledge of history.

This philosophy, of “Masonic” inspiration, is socially and politically totalitarian, emphasized the archbishop of Buenos Aires. Effectively speaking, it advocates “a God without a Church, a Church without Christ, a Christ without people.” It strips history of its flesh and blood, Bergolio explains.

The new edition of the work will be presented on November 16 by Cardinal Pietro Parolin, the pope’s secretary of state.

In other news, the first book in which Pope Francis shares his thoughts on Latin America should be available to the public on October 30 in Argentina, according to the Telam news agency on October 24. It is a book-long interview with Hernán Teyes Alcaide, a reporter who is Telam’s news correspondent in Rome.