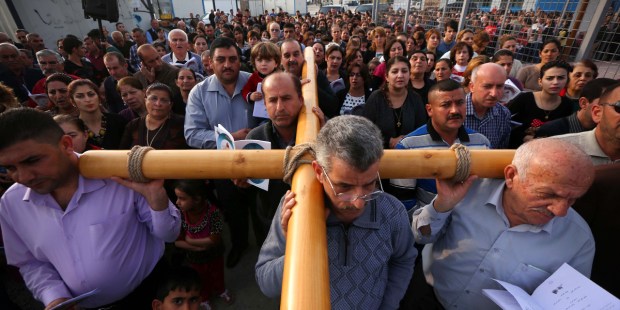 USAID funds will be funneled through churches in region to assist genocide victims.

President Donald J. Trump has ordered the United States Agency for International Development to fund churches, agencies, and organizations working with communities that have been persecuted by the Islamic State group and other terrorist groups.

“Christians in the Middle East should not have to rely on multinational institutions when America can help them directly,” Pence said, informing a gathering at the In Defense of Christians conference that Trump ordered the State Department to stop funding United Nations relief efforts for the affected communities. Instead, the USAID will fund the relief efforts directly. “We will no longer rely on the United Nations alone to assist persecuted Christians and minorities in the wake of genocide and the atrocities of terrorist groups. The United States will work hand-in-hand with faith-based groups and private organizations to help those who are persecuted for their faith.”

Critics of the UN’s relief efforts include Nina Shea, director of the Hudson Institute’s Center for Religious Freedom. She told the National Catholic Register that the UN’s mismanagement of USAID funds has not helped Christians return, and in some cases, made it impossible. Christians will not return to the town of Telkayf, for example, because the UN Development Program “resettled the extended families of ISIS there.”

“The Christians are terrified to return now,” she said.

“This is good news and we want to thank President Trump, Vice President Pence, and all those who have been working diligently on this issue” said former congressman Frank Wolf, Distinguished Senior Fellow at the 21st Century Wilberforce Initiative. “This should impact humanitarian aid for those living as Internally Displaced Persons and refugees and stabilization assistance for the Christians and Yezidis returning to areas seized from them by ISIS.”

The Wilberforce Initiative, which advocates for religious freedom, pointed out that the safe return of Christians and Yezidis to their homes in Iraq has direct national security impact on the U.S. and its allies in Europe, as well as Israel. “Based on the directive issued today from the White House, the State Department and U.S. Agency for International Development (USAID) can now structure assistance in a way that is responsive to these genocide victims’ unique circumstances,” the organization said in a statement.

Also applauding the move was the Knights of Columbus Supreme Knight Carl A. Anderson. “For almost two years, the K of C has warned that Christians and other religious minorities in the Middle East have been falling through the cracks in the aid system, and has been urging the United States government to provide aid directly to genocide-targeted communities,” Anderson said in a statement. “We are pleased that tonight, the administration has promised to do just that.”