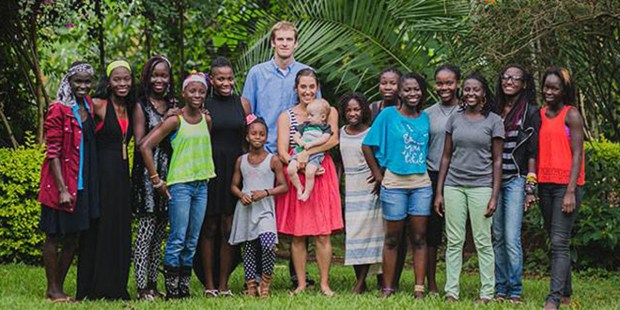 Katie Davis Majors, author of ‘Daring to Hope,’ has a message for us all.

Katie Davis first stepped foot in Uganda on a three-week mission trip when she was just 18 years old, but when she returned, she had a surprising message for her family. Choosing to forego her college plans, Katie announced that she had decided to return to Uganda immediately and live as a missionary dedicated to educating the people of Uganda.

Returning to Uganda, Katie taught in an orphanage, but her generosity was far from expended. By the time she was 23, she had adopted 13 young girls and cared for them as a single mom. In 2008, she founded Amazima Ministries (in the local language, “amazina” means “truth”) to educate young people.

Years later, she met the love of her life, Benji Majors, a fellow missionary, and they were married in 2015, welcoming their first son, Noah, in 2016. In an interview with Today, Katie said, “That has been God’s greatest gift to me! To find a husband who was not only willing, but excited to jump in to our crazy life.”

Katie’s first book, Kisses from Katie, was a New York Time‘s bestseller, and this year her second book was released, Daring to Hope: Finding God’s Goodness in the Broken and the Beautiful.

She says her experiences in Uganda have taught her “to hold on to hope in God in the midst of suffering and tragedy.”

“I’ve wrestled with ‘Who is God?’, and I feel like I’ve come out on the other side knowing that God is who He says He is — He is good, He is faithful, and He wants to comfort His people,” says Katie.

People all over the world have fallen in love with Katie’s joy and generosity, and she continues to inspire others to give what they have, to find God in the ordinariness of our lives, and to bring God’s love to others.

You can watch the full interview with Katie Majors here.

Read more:
7 attitudes of biblical women for all Christians to imitate