The habit that’s creating a generation of anxious kids 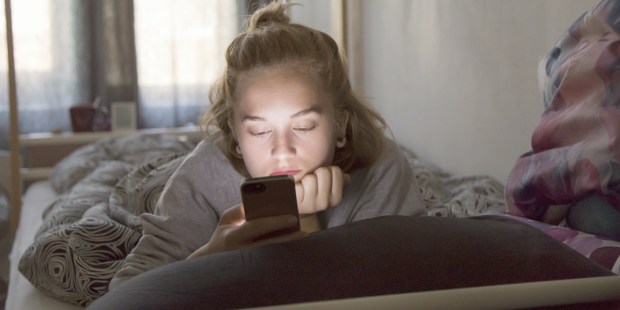 Science is finding increasingly stronger links between this technological advance and our mental health.

A few years ago, I had a nervous breakdown. I had recently emerged from the fog of postpartum depression feeling energized and capable, so I began to take on more social responsibilities and commitments. I started volunteering at my oldest daughter’s elementary school and at my youngest daughter’s preschool, made weekly coffee dates with friends, and basically overscheduled myself to death.

Predictably, this quickly become overwhelming and other areas of life — like the laundry — spun wildly out of control. I belatedly realized the error of my ways and began radically paring back on commitments, but even after I cleared my whole calendar to focus on the house, I was still overwhelmed. I was so overwhelmed that I suffered from my first and only episode of agoraphobia to date, collapsing in tears in our entryway because I couldn’t manage to walk next door to a birthday party.

This was my first experience with clinical anxiety, though not my last. One thing I learned in therapy is that anxiety is primarily rooted in avoidance, and back then my primary avoidance mechanism was retreating into social media for hours a day.

The New York Times recently featured an article about the alarming rise in American teenagers suffering from clinical anxiety. There’s a lot of theories about why anxiety has tripled in teenagers since the turn of the century, but only one has the weight of evidence behind it: the advent of smartphones.

At a workshop for parents last fall at the NW Anxiety Institute in Portland, Oregon, Kevin Ashworth, the clinical director, warned them of the “illusion of control and certainty” that smartphones offer anxious young people desperate to manage their environments. “Teens will go places if they feel like they know everything that will happen, if they know everyone who will be there, if they can see who’s checked in online,” Ashworth told the parents. “But life doesn’t always come with that kind of certainty, and they’re never practicing the skill of rolling with the punches, of walking into an unknown or awkward social situation and learning that they can survive it.”

Jean Twenge, a professor of psychology at San Diego State University who researches adolescent mental health and psychological differences among generations, used to be skeptical of those who sounded an alarm about teenage internet use. “It seemed like too easy an explanation for negative mental-health outcomes in teens, and there wasn’t much evidence for it,” she told me. She searched for other possible explanations, including economic ones. But the timing of the spike in anxious and depressed teenagers since 2011, which she called one of the sharpest and most significant she has seen, is “all wrong,” she said. “The economy was improving by the time the increase started.”

I had some success managing my own anxiety with medication and therapy, but I still struggled. It wasn’t until I made a serious and intentional change in my social media habits that I saw a drastic change.

My time seemed to multiply exponentially overnight. Without my iPhone in hand, the days stretched out with plenty of time in which to do laundry, clean the house, play with the kids, and even relax after dinner and watch a movie or read a book.

It took a little more time to get my bearings back socially, though. I’d always been an outgoing, social person, but years of Facebooking had conditioned me to a different kind of interaction. It was weird and unnerving to re-learn how to have conversations that couldn’t be thought through, typed out, and edited.

But it was immediately apparent how much more rewarding face-to-face social interaction was for me. Even when conversations were awkward and I felt weird about them, I still walked away feeling lighter and happier. And every coffee date or glass of wine gave me back a little bit of confidence and chipped away a little more anxiety.

There’s a risk to living life in the real world that doesn’t exist online. In real life, you can’t block someone halfway through a conversation or cultivate a select group of people who think just like you. You’ll inevitably encounter people who don’t agree with you and might not like you — and you have to learn how to accept that, and move on.

This is the biggest reason why my kids aren’t allowed to have phones or social media accounts. Social media might start as a form of avoidance, but it usually ends as a significant source of anxiety. The world is stressful enough already, and I want my kids to be able to face that stress and prevail. Smartphones make that much, much harder.

Read more:
Why smartphones before bed are toxic to your brain (VIDEO)