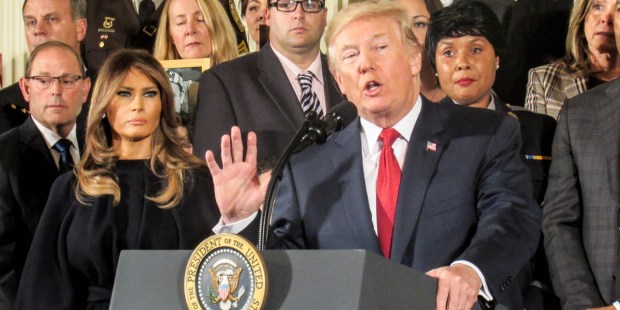 The Trump administration is declaring war on the opioid addiction crisis.

In a memorandum signed at the White House Thursday, President Donald J. Trump directed the acting Secretary of Health and Human Services to “consider declaring that the drug demand and opioid crisis” is a public health emergency.

That epidemic is said to be responsible for an average of 144 deaths a day in the United States.

“I am directing all executive agencies to use every appropriate emergency authority to fight the opioid crisis,” the president told a gathering in the East Room, which included relatives of those affected the crisis, members of Congress and administration officials.

But it was not the “national emergency” Trump had said he would declare, which would have involved an allocation of federal funding to address the issue. Thursday’s directive, which does not release any money to deal with the crisis, as the New York Times pointed out, was for a public health emergency, which can be declared for significant outbreaks of infectious disease or bioterrorist attacks.

Trump’s action would allow for, among other things, expanded access to telemedicine services, including services involving remote prescribing of medicine commonly used for substance abuse or mental health treatment. It also allows the Department of Health and Human Services to more quickly make temporary appointments of specialists with the tools and talent needed to respond effectively to the addiction crisis.

Overdose deaths were nearly equal to the number of deaths from car crashes. In 2015, for the first time, deaths from heroin alone surpassed gun homicides.

“As part of this emergency response, we will announce a new policy to overcome a restrictive 1970s-era rule that prevents states from providing care at certain treatment facilities with more than 16 beds for those suffering from drug addiction,” Trump said in his remarks. In addition, the FDA is now requiring drug companies that manufacture prescription opioids to “provide more training to prescribers and to help prevent abuse and addiction, and has requested that one especially high-risk opioid be withdrawn from the market immediately,” he said.

Simultaneously, the administration is beginning a focus on finding alternative, non-addictive ways to deal with pain. “At my direction, the National Institute of Health, headed up by Francis Collins, has taken the first steps of an ambitious public-private partnership with pharmaceutical companies to develop non-addictive painkillers and new treatments for addiction and overdose,” the president stated.

“We must adopt the most common-sense solution of all: to prevent our citizens from becoming addicted to drugs in the first place,” he added. “We must and are focusing so much of our effort on drug demand reduction. We must confront the culture of drug abuse head-on to reduce demand for dangerous narcotics. Every person who buys illicit drugs here in America should know that they are risking their futures, their families, and even their lives. And every American should know that if they purchase illegal drugs, they are helping to finance some of the most violent, cruel, and ruthless organizations anywhere in the world. Illegal drug use is not a victimless crime. There is nothing admirable, positive, or socially desirable about it.”

In March 2017, President Trump established the President’s Commission on Combating Drug Addiction and the Opioid Crisis “to study the scope and effectiveness of the federal response to drug addiction and the opioid crisis and to make recommendations to the president for improving that response.”

Trump also said that the Department of Justice’s Opioid Fraud and Abuse Detection Unit is “targeting individuals that are contributing to the prescription opioid epidemic, … secured the first-ever indictments against Chinese fentanyl manufacturers, and seized AlphaBay, the largest criminal marketplace on the Internet and a major source of fentanyl and heroin.”

The crisis, which has been widely reported on, is said to have caused 64,000 deaths in 2016. Among its causes are a too-easy access to painkillers that use opiates. When prescriptions ran out, some addicts turned to cheap heroin. In many places of the country, drug dealers have “cut” heroin, or supplemented it, with an imported synthetic opioid, fentanyl, which is many times stronger. Sometimes it is not mixed evenly, and addicts who unwittingly get a dose of purer fentanyl are overwhelmed, leading to overdose deaths.

It is not, as some may assume, a problem affecting only the ghettoes and inner cities. In a compilation detailing some of the struggles addicted Americans are facing, the Times wrote about Kolton World, a young man in rural Utah:

As she drives to work each morning, past horse ranches and nodding oil pumps, Marsha World stops to give her son, Kolton, a pale yellow pill to help keep him off heroin for another day.

There are few options for drug treatment in the high desert of central Utah, a remote expanse of struggling coal mines, white-steepled Mormon towns and some of the country’s highest opiate death rates. …

Getting drugs here proved just as easy as in the city: One Facebook message to an acquaintance did it.

In response to the president’s memorandum, Acting Health and Human Services Secretary Eric D. Hargan issued a declaration of a nationwide public health emergency regarding the opioid crisis.

“Today’s declaration, coupled with the President’s direction that executive agencies use all appropriate emergency authorities and other relevant authorities, is another powerful action the Trump Administration is taking in response to America’s deadly opioid crisis,” Hargan said in a statement. “President Trump has made this national crisis a top priority since he took office in January, and we are proud to be leading in this effort at HHS. His call to action today brings a new level of urgency to the comprehensive strategy HHS unveiled under President Trump, which empowers the real heroes of this fight: the communities on the frontlines of the epidemic.”