6 Movies about the devil (that aren’t R-rated) 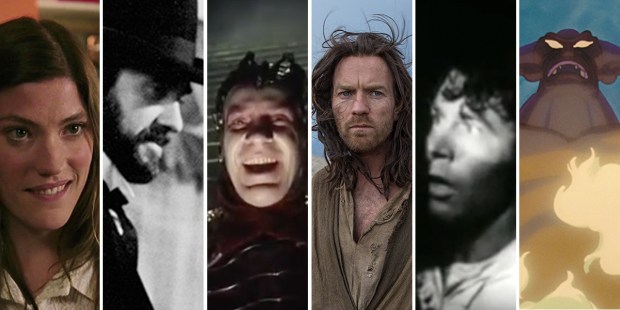 Halloween has always been a little spooky. And while our modern celebration of Halloween is more about candy and costumes (and for adults, parties) than an overt callout to the diabolical, links between our world and the underworld linger, particularly in our movies. For many, Halloween just wouldn’t be complete without watching a devilishly good movie.

But let’s face it: A lot of those “classic” films featuring the influence of the infernal are too disturbing and icky to sit down and watch for fun. Some are so well-known that they hold few surprises for us, much less scares. And some of you — Halloween or no — want to stay away from horror flicks altogether.

So instead of discussing well-worn films like The Exorcist or The Omen, this list takes a different tack. The following movies aren’t necessarily family friendly, but they all manage a PG-13 rating or lower. And while they all revolve around the devil, all offer distinctly different takes on Hades’ head honcho.

Seven years ago, Jabez Stone sold his soul to the devil in exchange for seven years good luck. Now “Mr. Scratch” (Walter Huston) wants the guy to pay up. In desperation, Jabez turns to famed orator Daniel Webster to defend him in court. Huston’s Scratch is a diabolical dynamo, sometimes beguiling and charming, at other times apoplectic with rage. He was nominated for an Oscar for his work here, and the nod was well deserved. (You can rent The Devil and Daniel Webster on Amazon and Vudu beginning at $2.99, or on iTunes for $3.99)

Odd how Lucifer keeps landing in court on this list, but that’s exactly what happens here, as Catholic priest Richard Moore is on trial for the death of the poor, doomed, possibly-possessed teen Emily Rose. That Emily died under the priest’s supervision isn’t in question: But was she simply a disturbed girl in need of serious medical attention? Or was she under the influence of the demonic — including Lucifer itself? The screenplay was written by Christian Scott Derrickson and skeptic Paul Harris Boardman, a pairing purposefully done to bring a certain ambiguity to the finished work. But for those inclined to believe, this exorcism movie is more than a study in the infernally grotesque: It’s a statement of faith. (You can stream The Exorcism of Emily Rose for 99 cents with an Amazon Prime membership, for $2.99 on YouTube and Google Play or for $3.99 on iTunes.)

Disney calls its most memorable demon — the bat-winged monstrosity we see in the “Night on Bald Mountain” sequence — Chernabog. But as a kid watching the film for the first time way back when, I knew exactly who this cat was: Satan incarnate. He could twist matter at will and destroy it with glee, and he scared the tiny pants off a certain 7-year-old. But even the darkest of demons can’t hold off the sacred light, and the movie’s touching “Ave Maria” sequence eventually banishes the devil from the screen. Thank goodness! Quite literally, in this case. (You can stream Fantasia for free with a Netflix account or rent it from a whole host of online services.)

Ewan McGregor does double duty in this complex, challenging film, playing both Jesus and Christ’s ultimate adversary. Satan’s a big, fat liar here —something that viewers would be wise to remember — trying to tell Jesus, very much bound by His human nature here — that God ain’t all that. “Everything matters to Him more than You,” Satan hisses. This certainly isn’t your standard Halloween horror flick, but Director Rodrigo Garcia created a deeply provocative (and some would say problematic) work with Last Days in the Desert. But this wily Satan only has the power granted to him from elsewhere, and he knows it. (You can stream Last Days in the Desert on Amazon, YouTube, iTunes and Google Play for $3.99.)

Something Wicked This Way Comes (1983)

In a small town, there’s nothing quite as thrilling as when a carnival comes to visit — but Mr. Dark’s Pandemonium Carnival offers thrills of a darker, more damnable kind. Based on Ray Bradbury’s classic novel, this Disney film is something of a rarity: A relatively kid-friendly, but still kinda scary movie. Oh, and rumor has it that Disney’s planning a remake, too — one that cleaves more closely to Bradbury’s original book. (The movie doesn’t appear to be available to stream through any reputable company, but you can rent the DVD from Netflix.)

This Terry Gilliam production (featuring a bevy of fellow Monty Pythoners) gives us a character known only as Evil who can’t quite figure out why the Supreme Being would’ve wasted his time on “43 species of parrots” when technology was so much more interesting. “If I were creating the world I wouldn’t mess about with butterflies and daffodils,” he huffs. “I would have started with lasers, eight o’clock, day one!” He’s a funny-but-fearsome opponent — more than a match for his diminutive, not-always-well-meaning adversaries in both strength and guile. But when he faces the Supreme Being Himself … well, let’s just say the showdown freezes Evil in his tracks. (You can stream Time Bandits from YouTube and Google Play for $2.99, or iTunes for $3.99.)

Six films, six very different depictions of the devil — and not all as horrific as you might expect. But they all just might serve as a diversion for you and yours this Halloween.

Read more:
Why is Satan depicted with horns, red tights and a pitchfork?

Read more:
When a satanic follower tried to steal the Eucharist